Dr Who stage show set to be a monster hit 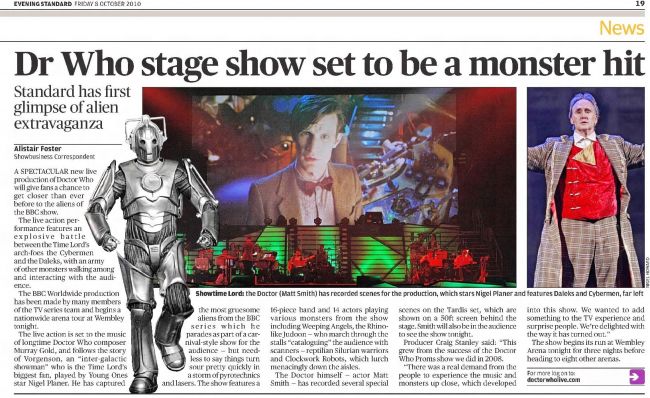 Showtime Lord: the Doctor (Matt Smith) has recorded scenes for the production, which stars Nigel Planer and features Daleks and Cybermen, far left

A SPECTACULAR new live production of Doctor Who will give fans a chance to get closer than ever before to the aliens of the BBC show.

The live action performance features an explosive battle between the Time Lord's arch-foes the Cybermen and the Daleks, with an army of other monsters walking among and interacting with the audience.

The BBC Worldwide production has been made by many members of the TV series team and begins a nationwide arena tour at Wembley tonight.

The live action is set to the music of longtime Doctor Who composer Murray Gold, and follows the story of Vorgenson, an "inter-galactic showman" who is the Time Lord's biggest fan, played by Young Ones star Nigel Planer. He has captured the most gruesome aliens from the BBC

series which he parades as part of a carnival-style show for the audience — but needless to say things turn sour pretty quickly in a storm of pyrotechnics and lasers. The show features a 16-piece band and 14 actors playing various monsters from the show including Weeping Angels, the Rhino-like Judoon — who march through the stalls "cataloguing" the audience with scanners — reptilian Silurian warriors and Clockwork Robots, which lurch menacingly down the aisles.

The Doctor himself — actor Matt Smith — has recorded several special scenes on the Tardis set, which are shown on a 50ft screen behind the stage. Smith will also be in the audience to see the show tonight.

Producer Craig Stanley said: "This grew from the success of the Doctor Who Proms show we did in 2008. "There was a real demand from the people to experience the music and monsters up close, which developed into this show. We wanted to add something to the TV experience and surprise people. We're delighted with the way it has turned out."

The show begins its run at Wembley Arena tonight for three nights before heading to eight other arenas.