Drop the dead Daleks, it's Dr Who the sex machine 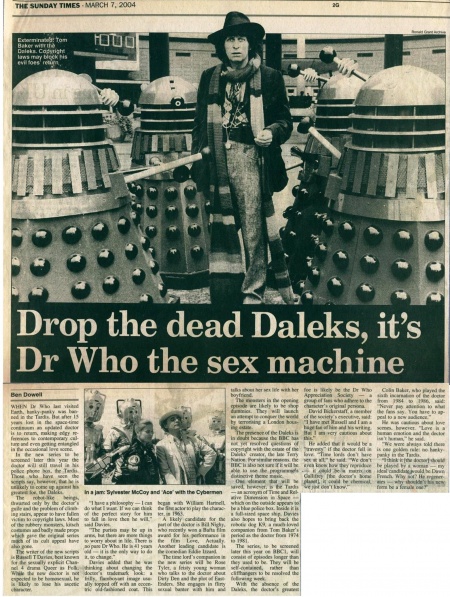 Drop the dead Daleks, it's Dr Who the sex machine

WHEN Dr Who last visited Earth. hanky-panky was banned in the Tardis. But after 15 years lost in the space-time continuum an updated doctor is to return, making edgy references to contemporary culture and even getting entangled in the occasional love scene.

In the new series to be screened later this year the doctor will still travel in his police phone box, the Tardis. Those who have seen the scripts say, however, that he is unlikely to come up against his greatest foe, the Daleks.

The robot-like beings, thwarted only by the doctor's guile and the problem of climbing stairs, appear to have fallen victim to copyright laws. Most of the rubbery monsters, kitsch costumes and badly made props which gave the original series much of its cult appeal have also gone.

The writer of the new scripts is Russell T Davies, best known for the sexually explicit Channel 4 drama Queer as Folk. While the new doctor is not expected to be homosexual, he is likely to lose his ascetic character.

"I have a philosophy — I can do what I want. If we can think of the perfect story for him to fall in love then he will," said Davies.

"The purists may be up in arms, but them are mom things to worry about in life. There is no pure Dr Who. He is 41 years old — it is the only way to do it, to change."

Davies added that he was thinking about changing the doctor's trademark look: a frilly. flamboyant image usually topped off with an eccentric old-fashioned coat. This began with William Hartnell. the first actor to play the character, in 1963.

A likely candidate for the pan of the doctor is Bill Nighy, who recently won a Baha film ward for his performance in the film love. Actually. Another leading candidate is the comedian Eddie Izzard.

The time lord's companion in the new will be Rose Tyler a feisty young woman who talks about Dirty Den and the plot of EastEnders. She engages in flirty sexual banter with him and talks about her sex life with her boyfriend.

The monsters in the opening episode are likely to be shop dummies. They will launch an attempt to conquer the world by terrorising a London housing estate.

The presence of the Daleks is in doubt because the BBC has not yet resolved questions of copyright with the estate of the Daleks' creator. the late Terry Nation. For similar reasons, the BBC is also not sure if it will be able to use the programme's distinctive theme music.

One element that will be saved, however, is the Tardis -- an acronym of Time and Relative Dimension in Space which on the outride appears to be a blue police box. Inside it is a full-sized space ship. Davies also hopes to bring back the robotic dog K9, a much-loved companion from Tom Baker's period as the doctor from 1974 to 1981.

The series, to be screened later this year on BBC1, will consist of episodes longer than they used to be. They will be self-contained, rather than cliffhangers to be resolved the following week.

With the absence of the Daleks: the doctor's greatest foe is likely be the Dr Who Appreciation Society — a group of fans who adhere to the character's original persona. David Bickerstaff, a member of the society's executive, said: "I have met Russell and 1 am a huge fan of him and his writing. But I am very cautious about this."

He added that it would be a "travesty" if the doctor fell in love. 'Time lords don't have sex at all," he said. "We don't even know how they reproduce -- it could be a matrix on Gallifrey [the doctor's home planet], it could be chemical, we just don't know."

Colin Baker, who played the sixth incarnation of the doctor from 1984 to 1986. said: "Never pay attention to what the fans say. You have to appeal to a new audience."

He was cautious about love scenes, however. "Love is human emotion and the doctor isn't human," he said.

"We were always told there is one golden rule: no hanky-peaky in the Tardis.

I think it [the doctor] should be played by a woman — my ideal candidate would be Dawn French. Why not? He regenerates — why shouldn't his new form be a female one?

Caption: In a jam: Sylvester McCoy and 'Ace' with the Cybermen