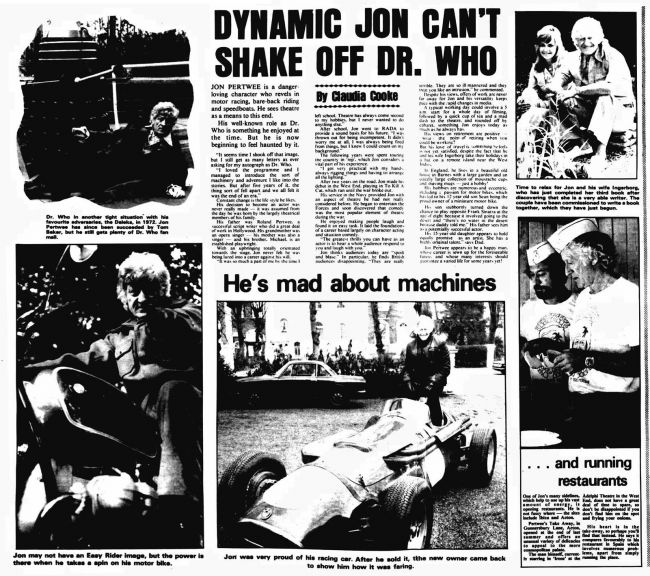 JON PERTWEE is a danger-loving character who revels in motor racing, bare-back riding and speedboats. He sees theatre as a means to this end.

His well-known role as Dr. Who is something he enjoyed at the time. But he is now beginning to feel haunted by it.

"It seems time I shook off that image. but I still get as many letters as ever asking for my autograph as Dr. Who.

"I loved the programme and I managed to introduce the sort of machinery and adventure I like into the stories. But after five years of it. the thing sort of fell apart and we all felt it was the end of an era."

Constant change is the life style he likes.

His decision to become an actor was never really made it was assumed from the day he was born by the largely theatrical members of his family.

His father was Roland Pertwee, a successful script writer who did a great deal of work in Hollywood. His grandmother was an opera singer his mother was also a singer and his brother, Michael, is an established playwright.

With an upbringing totally orientated towards the stage. Jon never felt he was being lured into a career against his will.

"It was so much a part of me by the time I left school. Theatre has always come second to my hobbies. but I never wanted to do anything else."

After school, Jon went to RADA to provide a sound basis for his future. "I was thrown out for being incompetent. It didn't worry me at all. I was always being fired from things, but I knew I could count on background."

The following years were spent touring the country in 'rep', which Jon considers a vital part of his experience.

"I got very practical with my hand. always rigging things and having to arrange all the lighting.

After two years on the road. Jon made hi, debut in the West End. playing in To Kill A Cat, which ran until the war broke out.

His service in the Navy provided Jon with an aspect of theatre he had not really considered before. He began to entertain the Forces and soon discovered that comedy was the most popular element of theatre during the war.

He enjoyed making people laugh and found it an easy task. It laid the foundations of a career based largely on character acting and situation comedy.

"The greatest thrills you can have as an actor is to hear a whole audience respond to you and laugh with you."

Jon thinks audiences today are "spoilt and blase." In particular, he finds British audiences disappointing. "They are really terrible. They are so ill mannered and they treat you like an intrusion," he commented.

Despite his views, offers of work are never far away for Jon and his versatility keeps pace with the rapid changes in media.

A typical working day could involve a 5 a.m. start for a whole day of filming. followed by a quick cup of tea and a mad dash to the theatre, and rounded off by cabaret, something Jon enjoys today as much as he always has.

His views on retirement are positive - what's the point of retiring when you could be working?

But his love of travel is something he feels is not yet satisfied, despite the fact that he and his wife Ingerborg take their holidays in a hut on a remote island near the West Indies.

In England, he lives in a beautiful old house in Barnes with a large garden and an equally large collection of moustache cups and shaving mugs -- just a hobby!

His hobbies are numerous and eccentric, including a passion for motor bikes, which has led to his 12 year old son Sean being the proud owner of a miniature motor bike.

His son stubbornly turned down the chance to play opposite Frank Sinatra at the age of eight because it involved going to the desert and "there's no water in the desert because daddy told me." His father sees him as a potentially successful actor.

His 15-year-old daughter appears to hold equally promise as an artist. She has a highly original talent," says Dad.

Jon Pertwee appears to be a happy man, whose career is sewn up for the foreseeable future, and whose many interests should guarantee a varied life for some years yet!

Dr. Who in another tight situation with this favourite adversaries, the Daleks, in 1972. Jon Pertwee has since been succeeded by Tom Baker, but he still gets plenty of Dr. Who fan mail.

Jon may not have an Easy Rider image, but the power is there when he takes a spin on his motor bike.

Jon was very proud of his racing car. After he sold it, the new owner came back to show him how it was faring.

Time to relax for Jon and his Ingerborg, who has just completed her third book after discovering that she is a very able writer. The couple have been commissioned to write a book together, when they have just begun.

One of Jon's many sidelines, which help to use up his vast amount of energy, is opening restaurants.

Pertwee's Take Away, in Gunnersbury Lane, Acton, opened at the end of last summer and offers an unusual variety of delicacies to appeal to the more cosmopolitan palate.

The man himself, currently starring in 'Irene' at the Adelphi Theater in the West End, does not have a great deal of time to spare, so don't be disappointed if you don't find him on the spot and frying your onions.

His heart is in the take-away, so perhaps you'll find that instead. He says it compares favourably to his restaurant in Spain which involves numerous problems, apart from simply running the place.