Enter into the world of Cult TV ... 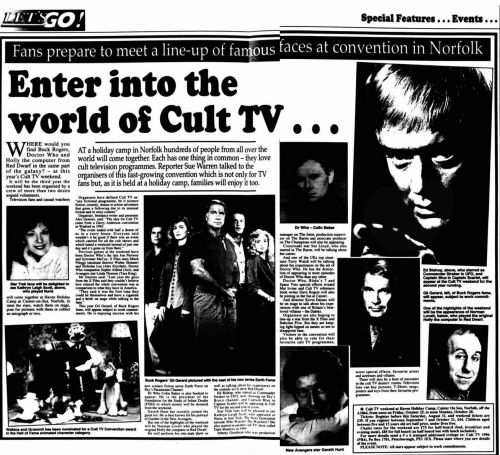 AT a holiday camp in Norfolk hundreds of people from all over the world will come together. Each has one thing in common - they love cult television programmes. Reporter Sue Warren talked to the organisers of this fast-growing convention which is not only for TV fans but, as it is held at a holiday camp, families will enjoy it too.

WHERE would you find Buck Rogers, Doctor Who and Holly the computer from Red Dwarf in the same part of the galaxy? - at this year's Cult TV weekend.

It will be the third year the weekend has been organised by a crew of more than two dozen unpaid volunteers.

Television fans and casual watchers will come together at Haven Holiday Camp at Caister-on-Sea, Norfolk, to meet the stars, watch them on stage, pose for pictures with them or collect an autograph or two.

Organisers have defined Cult TV as "any fictional programme, be it science fiction, comedy, drama or action adventure that gains a following due to its unusual format and or story content."

Organiser, freelance writer and presenter Alex Geairns said "The idea for Cult TV came from a Gerry Anderson convention in Watford in 1993.

"The event ended with half a dozen of us in a curry house. Everyone said wouldn't it be good if there was an event which catered for all the cult shows and which lasted a weekend instead of just one day and it's gone on from there."

Mr Geairns said: "Last year the guys tom the X Files said they couldn't believe how relaxed the whole convention was in comparison to what they have in America.

"They said it was the first time they could be themselves and have a cigarette and a drink on stage while talking to fans."

This year Gil Gerard, of Buck Rogers fame, will appear subject to work commitments. He is enjoying success with his new science fiction series Earth Force on Sky's Paramount Channel.

Dr Who Colin Baker is also booked to appear. He is the president of the Foundation for the Study of Infant Deaths (FSID) to which money will be donated from the weekend.

Gareth Hunt has recently joined the guest list. He is best known for his portrayal of Gambit in the New Avengers.

One of one of the highlights of the weekend will be Norman Lovett who played the originaly Holly the computer in Red Dwarf.

He will perform his one-man show as well as talking about his experiences on the comedy sci-fi show Red Dwarf.

Ed Bishop, who starred as Commander Straker in UFO, now showing on Sky's Bravo channel, and Captain Blue in Captain Scarlet will be appearing at Cult TV for the second year in a row.

Star Trek fans will be pleased to see Kathryn Leigh Scott, who appeared as Nuria in Start Trek The Next Generation episode Who Watches The Watchers? She also starred in another cult TV show called Dark Shadows in 1966.

Johnny Goodman who was production manager on The Saint, production supervisor on The Baron and associate producer on The Champions will also be appearing.

Crossroads star Sue Lloyd, who also starred in The Baron will be talking about her career.

And one of the UKs top stuntmen Terry Walsh will be talking about his experiences on the set of Doctor Who. He has the distinction of appearing in more episodes od Doctor Who than any other.

And director Kevin Daines will be on stage to talk about his experiences with one of Britain's best loved villains - the Daleks.

Organisers are also hoping to line-up a star from the X Files and Babylon Five. But they are keeping tight-lipped on names so not to disappoint fans.

Visitors to the convention will be able to vote for their favourite cult TV programmes, worst special effects, favourite actors and actresses and villains.

There will also be a host of souvenirs in the cult TV dealers' rooms. Television fans can buy pictures, T-shirts, mugs, posters and toys from their favourite programmes.

Star Trek fans will be delighted to see Kathryn Leigh Scott, above, who played Nuria

Wallace and Grommit has been nominated for a Cult TV Convention award in the Hall of Fame animated character category.

Ed Bishop, above, who starred as Commander Straker in UFO, and Captain Blue in Captain Scarlet, will appear at the Cult TV weekend for the second year running

One of the highlights of the weekend will be the appearance of Norman Lovett, below, who played the original Holly the computer in Red Dwarf.