Ex-Doctor Who Baker 'may return as villain' 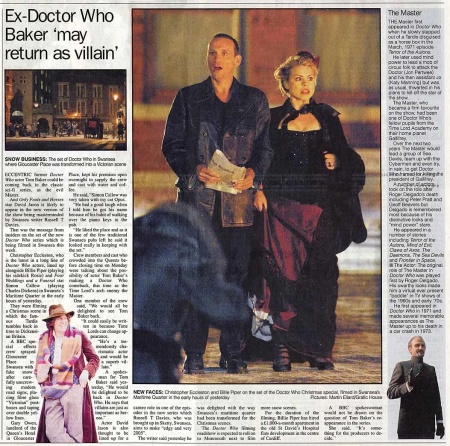 Eccentric former Doctor Who actor Tom Baker could be coming back to the classic sci-fi series, as the evil Master.

And Only Fools and Horses star David Jason is likely to appear in the new version of the show being masterminded by Swansea writer Russell T Davies.

That was the message from insiders on the set of the new Doctor Who series which is being filmed in Swansea this week.

Christopher Eccleston, who is the latest in a long line of Doctor Who actors, lined up alongside Billie Piper (playing his sidekick Rosie) and Four Weddings and a Funeral star Simon Callow (playing Charles Dickens) in Swansea's Maritime Quarter in the early hours of yesterday.

They were filming a Christmas scene in which the famous Tardis tumbles back in time to Dickensian Britain.

Gary Owen, landlord of the Queen's Hotel in Gloucester Place, kept his premises open overnight to supply the crew and cast with water and coffee.

He said, 'Simon Callow was very taken with my cat Opus.

'He had a good laugh when I told him he got his name because of his habit of walking over the piano keys in the pub.

'He liked the place and as it is one of the few traditional Swansea pubs left he said it looked really in keeping with the set.'

Crew members and cast who crowded into the Queens before closing time on Monday were talking about the possibility of actor Tom Baker's making a Doctor Who comeback, this time as the Time Lord's arch enemy the Master.

One member of the crew said, 'We would all be delighted to see Tom Baker back.

'It could easily be written in because Time Lords can change appearance.

'He's a tremendously charismatic actor and would be a superb villain.'

A spokesman for Tom Baker said yesterday, 'He would be delighted to be back in Doctor Who. He says that villains are just as important as heroes.'

Actor David Jason is also thought to be lined up for a cameo role in one of the episodes in the new series which Russell T Davies, who was brought up in Sketty, Swansea, aims to make 'edgy and very 2005'.

The writer said yesterday he was delighted with the way Swansea's maritime quarter had been transformed for the Christmas scenes.

The Doctor Who filming roadshow is expected to roll on to Monmouth next to film more snow scenes.

For the duration of the filming, Billie Piper has hired a pounds £1,000-a-month apartment in the old St David's Hospital flats development in the centre of Cardiff.

A BBC spokeswoman would not be drawn on the question of Tom Baker's reappearance in the series.

She said, 'It's something for the producers to decide.'

The Master first appeared in Doctor Who when he slowly stepped out of a Tardis disguised as a horse box in the March, 1971 episode Terror of the Autons. He later used mind power to lead a mob of circus folk to attack the Doctor (Jon Pertwee) and his then assistant Jo (Katy Manning) but was, as usual, thwarted in his plans to kill off the star of the show.

The Master, who became a firm favourite on the show, had been one of Doctor Who's fellow pupils from the Time Lord Academy on their home planet Gallifrey.

Over the next two years The Master would lead a group of Sea Devils, team up with the Cybermen and even try, in vain, to get Doctor Who framed for killing the president of Gallifrey.

A number of actors took on the role after Roger Delgado's death including Peter Pratt and Geoff Beavers but Delgado is remembered most because of his distinctive looks and 'mind power' stare.

He appeared in a number of stories including Terror of the Autons, Mind of Evil, Claws of Axos, The Daemons, The Sea Devils and Frontier in Space.

The Actor: The original role of The Master in Doctor Who was played first by Roger Delgado. His swarthy looks made him a virtual ever present 'baddie' in TV shows of the 1960s and early '70s.

He first appeared in Doctor Who in 1971 and made several memorable appearances as The Master up to his death in a car crash in 1973.