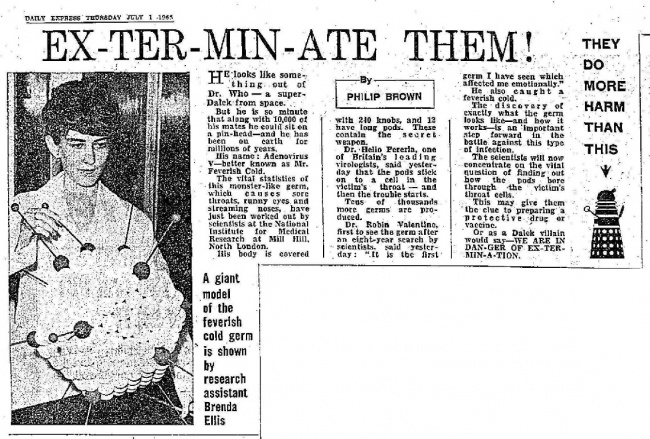 They Do More Harm Than This

HE looks like something out of Dr. Who — a super-Dalek from space.

But he is so minute that along with 10,000 of his mates he could sit on a pin-head—and he has been on earth for millions of years.

The vital statistics of this monster-like germ, which causes sore throats, runny eyes and streaming noses, have Just been worked out by scientists at the National Institute for Medical Research at Mill Hill, North London.

His body is covered with 240 knobs, and 12 have long pods. These contain the secret weapon.

Dr. Helio Pereria, one of Britain's leading virologists, said yesterday that the pods stick on to a cell in the victim's throat -- and then the trouble starts.

Dr. Robin Valentine, first to see the germ after an eight-year search by scientists. said yesterday : " It is the first germ I have seen which affected me emotionally." He also caught a feverish cold.

The scientists will now concentrate on the vital question of finding out bow the pods bore through 'the victim's throat cells.

This may give them the clue to preparing a protective drug or vaccine.

Or as a Dalek villain would say—WE ARE IN DAN-GER OF EX-TER-MIN-A-TION.

Caption: A giant model of the feverish cold germ is shown by research assistant Brenda Ellis