Expertise that goes to waste 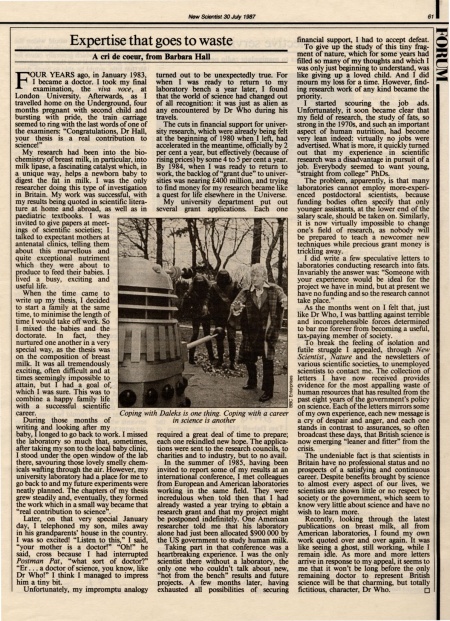 FOUR YEARS ago, in January 1983, I became a doctor. I took my final examination, the viva voce, at London University. Afterwards, as I travelled home on the Underground, four months pregnant with second child and bursting with pride, the train carriage seemed to ring with the last words of one of the examiners: "Congratulations, Dr Hall, your thesis is a real contribution to science!"

My research had been into the biochemistry of breast milk, in particular, into milk lipase, a fascinating catalyst which, in a unique way, helps a newborn baby to digest the fat in milk. I was the only researcher doing this type of investigation in Britain. My work was successful, with my results being quoted in scientific literature at home and abroad, as well as in paediatric textbooks. I was invited to give papers at meetings of scientific societies; I talked to expectant mothers at antenatal clinics, telling them about this marvellous and quite exceptional nutriment which they were about to produce to feed their babies. I lived a busy, exciting and useful life.

When the time came to write up my thesis, I decided to start a family at the same time, to minimise the length of time I would take off work. So I mixed the babies and the doctorate. In fact, they nurtured one another in a very special way, as the thesis was on the composition of breast milk. It was all tremendously exciting, often difficult and at times seemingly impossible to attain, but I had a goal of, which I was sure. This was to combine a happy family life with a successful scientific career.

During those months of writing and looking after my baby, I longed to go back to work. I missed the laboratory so much that, sometimes, after taking my son to the local baby clinic, I stood under the open window of the lab there, savouring those lovely smelly chemicals wafting through the air. However, my university laboratory had a place for me to go back to and my future experiments were neatly planned. The chapters of my thesis grew steadily and, eventually, they formed the work which in a small way became that "real contribution to science".

Later, on that very special January day, I telephoned my son, miles away in his grandparents' house in the country. I was so excited! "Listen to this," I said, "your mother is a doctor!" "Oh!" he said, cross because I had interrupted Postman Pat, "what sort of doctor?" "Er ... a doctor of science, you know, like Dr Who!" I think I managed to impress him a tiny bit.

Unfortunately, my impromptu analogy turned out to be unexpectedly true. For when I was ready to return to my laboratory bench a year later, I found that the world of science had changed out of all recognition: it was just as alien as any encountered by Dr Who during his travels.

The cuts in financial support for university research, which were already being felt at the beginning of 1980 when I left, had accelerated in the meantime, officially by 2 per cent a year, but effectively (because of rising prices) by some 4 to 5 per cent a year. By 1984, when I was ready to return to work, the backlog of "grant due" to universities was nearing £400 million, and trying to find money for my research became like a quest for life elsewhere in the Universe.

My university department put out several grant applications. Each one required a great deal of time to prepare; each one rekindled new hope. The applications were sent to the research councils, to charities and to industry, but to no avail.

In the summer of 1985, having been invited to report some of my results at an international conference, I met colleagues from European and American laboratories working in the same field. They were incredulous when told then that I had already wasted a year trying to obtain a research grant and that my project might be postponed indefinitely. One American researcher told me that his laboratory alone had just been allocated $900 000 by the US government to study human milk.

Taking part in that conference was a heartbreaking experience. I was the only scientist there without a laboratory, the only one who couldn't talk about new, "hot from the bench" results and future projects. A few months later, having exhausted all possibilities of securing financial support, I had to accept defeat.

To give up the study of this tiny fragment of nature, which for some years had filled so many of my thoughts and which I was only just beginning to understand, was like giving up a loved child. And I did mourn my loss for a time. However, finding research work of any kind became the priority.

I started scouring the job ads. Unfortunately, it soon became clear that my field of research, the study of fats, so strong in the 1970s, and such an important aspect of human nutrition, had become very lean indeed: virtually no jobs were advertised. What is more, it quickly turned out that my experience in scientific research was a disadvantage in pursuit of a job. Everybody seemed to want young, "straight from college" PhDs.

The problem, apparently, is that many laboratories cannot employ more-experienced postdoctoral scientists, because funding bodies often specify that only younger assistants, at the lower end of the salary scale, should be taken on. Similarly, it is now virtually impossible to change one's field of research, as nobody will be prepared to teach a newcomer new techniques while precious grant money is trickling away.

I did write a few speculative letters to laboratories conducting research into fats. Invariably the answer was: "Someone with your experience would be ideal for the project we have in mind, but at present we have no funding and so the research cannot take place."

As the months went on I felt that, just like Dr Who, I was battling against terrible and incomprehensible forces determined to bar me forever from becoming a useful, tax-paying member of society.

To break the feeling of isolation and futile struggle I appealed, through New Scientist, Nature and the newsletters of various scientific societies, to unemployed scientists to contact me. The collection of letters I have now received provides evidence for the most appalling waste of human resources that has resulted from the past eight years of the government's policy on science. Each of the letters mirrors some of my own experience, each new message is a cry of despair and anger, and each one stands in contrast to assurances, so often broadcast these days, that British science is now emerging "leaner and fitter" from the crisis.

The undeniable fact is that scientists in Britain have no professional status and no prospects of a satisfying and continuous career. Despite benefits brought by science to almost every aspect of our lives, we scientists are shown little or no respect by society or the government, which seem to know very little about science and have no wish to learn more.

Recently, looking through the latest publications on breast milk, all from American laboratories, I found my own work quoted over and over again. It was like seeing a ghost, still working, while I remain idle. As more and more letters arrive in response to my appeal, it seems to me that it won't be long before the only remaining doctor to represent British science will be that charming, but totally fictitious, character, Dr Who.