Exterminate stress inside a real Dalek 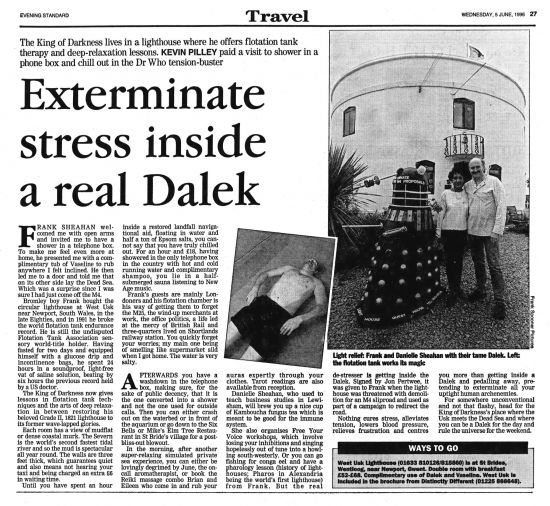 The King of Darkness lives in a lighthouse where he offers flotation tank therapy and deep-relaxation lessons. KEVIN PILLEY paid a visit to shower in a phone box and chill out in the Dr Who tension-buster

RANK SHEAHAN welcomed me with open arms and invited me to have a shower in a telephone box.

To make me feel even more at home, he presented me with a complimentary tub of Vaseline to rub anywhere I felt inclined. He then led me to a door and told me that on its other side lay the Dead Sea. Which was a surprise since I was sure I had just come off the M4.

Bromley boy Frank bought the circular lighthouse at West Usk near Newport, South Wales, in the late Eighties, and in 1991 he broke the world flotation tank endurance record. He is still the undisputed Flotation Tank Association sensory world-title holder. Having fasted for two days and equipped himself with a glucose drip and incontinence bags, he spent 24 hours in a soundproof, light-free vat of saline solution, beating by six hours the previous record held by a US doctor.

The King of Darkness now gives lessons in flotation tank techniques and the arts of deep relaxation in between restoring his beloved Grade II, 1821 lighthouse to its former wave-lapped glories.

Each room has a view of mudflat or dense coastal murk. The Severn is the world's second fastest tidal river and so the mud is spectacular all year round. The walls are three feet thick, which guarantees quiet and also means not hearing your taxi and being charged an extra £6 in waiting time.

Until you have spent an hour inside a restored landfall navigational aid, floating in water and half a ton of Epsom salts, you cannot say that you have truly chilled out. For an hour and £18, having showered in the only telephone box in the country with hot and cold running water and complimentary shampoo, you lie in a half-submerged sauna listening to New Age music.

Frank's guests are mainly Londoners and his flotation chamber is his way of getting them to forget the M25, the wind-up merchants at work, the office politics, a life led at the mercy of British Rail and three-quarters lived on Shortlands railway station. You quickly forget your worries; my main one being of smelling like supermarket sild when I got home. The water is very salty.

AFTERWARDS you have a washdown in the telephone box, making sure, for the sake of public decency, that it is the one converted into a shower and not the one used for outside calls. Then you can either crash out on the waterbed or in front of the aquarium or go down to the Six Bells or Mike's Elm Tree Restaurant in St Bride's village for a post-bliss-out blowout.

In the morning, after another super-relaxing simulated private sea experience, you can either be lovingly degrimed by June, the on-call aromatherapist, or book the Reiki massage combo Brian and Eileen who come in and rub your auras expertly through your clothes. Tarot readings are also available from reception.

Danielle Sheahan, who used to teach business studies in Lewisham, will brew you up a nice cup of Kamboucha fungus tea which is meant to be good for the immune system.

She also organises Free Your Voice workshops, which involve losing your inhibitions and singing hopelessly out of tune into a howling south-westerly. Or you can go fishing for conga eel and have a pharology lesson (history of lighthouses; Pharos in Alexandria being the world's first lighthouse) from Frank. But the real de-stresser is getting inside the Dalek. Signed by Jon Pertwee, it was given to Frank when the lighthouse was threatened with demolition for an M4 sliproad and used as part of a campaign to redirect the road.

Nothing cures stress, alleviates tension, lowers blood pressure, relieves frustration and centres you more than getting inside a Dalek and pedalling away, pretending to exterminate all your uptight human archenemies.

For somewhere unconventional and not that flashy, head for the King of Darkness's place where the Usk meets the Dead Sea and where you can be a Dalek for the day and rule the universe for the weekend.