Exterminate the Daleks? You must be joking 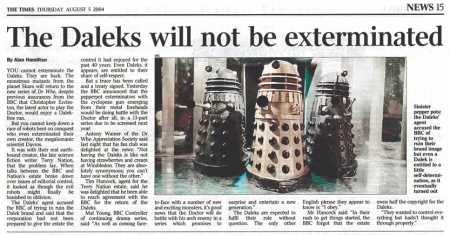 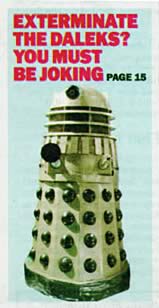 YOU cannot exterminate the Daleks. They are hack. The monstrous mutants from the planet Skaro will return to the new series of Doctor Who, despite previous assurances from the BBC that Christopher Eccleston, the latest actor to play the Doctor, would enjoy a Dalek-free run.

But you cannot keep down a race of robots bent on conquest who even exterminated their own creator, the megalomanic scientist Davros.

It was with their real Earthbound creator, the late science fiction writer Terry Nation, that the problem lay. When talks between the BBC and Nation's estate broke down over issues of editorial control, it looked as though the evil robots might finally be banished to oblivion.

The Daleks' agent accused the BBC of trying to ruin the Dalek brand, and said that the corporation had not been prepared to give the estate the control it had enjoyed for the past 40 years. Even Daleks, it appears, are entitled to their share of self-respect.

But a truce has been called and a treaty signed, and yesterday the BBC announced that the pepperpot exterminators with the Cyclopean gun emerging from their metal foreheads would be doing battle with the Doctor after all, in a 13-part series due to be screened next year. Antony Wainer, of the Doctor Who Appreciation Society, said last night the fan club was delighted at the news: "Not having the Daleks is like not having strawberries and cream at Wimbledon. They are absolutely synonymous; you can't have one without the other."

Tim Hancock, agent for the Nation estate, said that he was delighted that he been able to reach agreement with the BBC for the return of the Daleks.

"In their excitement. and in their rush to get things started, the BBC forgot that the estate owns half the copyright for the Daleks," he said.

Asked what the new Daleks would look like, he said: "We all accept that the Daleks were designed in the early Sixties and need to be updated.

"The Daleks have got to be able to move, be mobile, but they have also got to retain the initial look of the Daleks about them."

Mal Young, BBC controller of continuing drama series, said: "As well as coming face to face with a number oí new and exciting monsters, it's good news that the Doctor will do battle with his arch enemy in a series which promises to surprise and entertain a new generation."

The Daleks are expected to fulfil their role without question. The only other English phrase they appear to know is: "I obey."