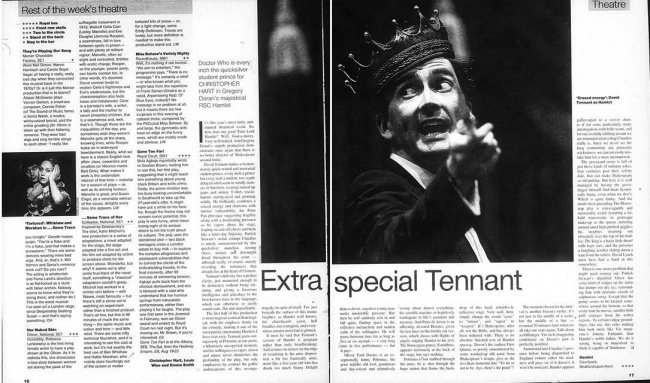 In this year's most hotly anticipated theatrical event. So,. how does my good Time Lord Hamlet? Well. God-a-mercy. Very well indeed. And Gregory Doran's superb production demonstrates once again that there is no better director of Shakespeare around today.

David Tennant makes a tremendously quick-witted and mercurial student prince, every inch a prince but every inch a student, too: a pale delayed-adolescent in scruffy trainers or barefoot, wearing turned-up jeans and skinny T-shirt, tousle-haired, staring-eyed and grinning wildly. He brilliantly combines a cruet' energy and charisma with intense vulnerability. his Peter Pan physique suggesting fragility along with a dominating presence as he capers about the stage, leaping on and off chests and beds like a latter-day Nijinsky. Patrick Stovart's stolid. corrupt Claudius is utterly outmanoeuvred by this quicksilver anarchist, sowing chaos, anxiety anti downright dread throughout the coon —although really. of course, merely revealing the rottenness that already lies at the heart of Elsinore.

Tenant's delivery has a perfect clarity, just mannered enough to be distinctive without being irritating, and giving a ferocious intelligence and articulacy to the best-known lines in the language. which can otherwise so easily sound stale, fiat and unprofitable.

The first half of this production is more tragical-comical than tragical, with the emphasis firmly on the comedy, making it one of the most purely entertaining Hamlets I have ever seen. Tennant gums outrageously at Polonius at one point, a hilariously unexpected moment and his willingness to caper, clown and amuse never diminishes the profundity of the play, but only emphasises by contrast the gothic undercurrents of this revenge-tragedy-in-spite-of itself. For just beneath the surface of this manic laughter. as Hamlet well knows, the churchyards yawn. hell breathes out contagion, and everywhere murder most foul is plotted. It must be said that Tenant's version of Hamlet is poignant rather than truly heartbreaking. And at times he teeters on the edge of ovendoing it, his antic disposition a bit too frantically antic, more like a five-year old who has drunk too much Sunny Delight I'Crazed energy': David Tennant as Hamlet

Than a clever, sensitive young man under intolerable pressure. But suddenly rein in and fall quiet, finding space in the reflective melancholy and sudden calm of his soliloquies. He will pause between lines for as long as five or six seconds — a very long time in live performance — but it pays.

Oliver Ford Davies is an exceptionally funny Polonius, the poor tedious old fool, ponderous and dry-voiced and relentlessly wrong about almost everything, his sensible maxims so hopelessly inadequate to life's grandeur and mystery. And Peter de Jersey is an affecting, devoted Horatio, given the last lines in this boldly cut version, which closes with flight of angels singing Hamlet to his rest. The Norwegian prince, Fortinbras, appears ominously at the back of the stage, but says nothing.

Polonius is not stabbed through the arras, he is shot through the huge mirror that forms the backdrop of this hard, relentlessly reflective stage. Very well, then, simply change the words "arras" to "mirror", and "rapier" to "weapon". It's Shakespeare, after all, not the Bible, and has always been tinkered with. There is no absolute finished text of Hamlet anyway. Doesn't the earliest First Quarto, as poorly remembered by some washed-up old actor from Shakespeare's troupe, give us the less-than-immortal line "To be or not to be. Aye. there's the point"?

The moment chosen for the interval is another bravura stroke: it's not just in the middle of a scene, but the middle of a line — resumed 20 minutes later when we all take our seats again. Talk about a cliffhanger. Yet such swaggering confidence on Doran's part is perfectly justified.

Summoned into Claudius's presence berm being dispatched to England (where either his madness will pass, or, if it doesn't, it won't be noticed). Hamlet appears gaffer-taped to a swivel chair, as if for some particularly nasty interrogation-with-frills scene, and for one usefully chilling instant are reminded what a thug Claudius really is. Since we never see king, committing any particular wickedness, we can too easily mistake him for a more incompetent.

The graveyard scene is full just those kinds of unfunny joke four centuries past their sell-by date, that can make Shakespeare so off-putting. But here it is well managed by having the gravedigger himself find them hysterically funny, even when we don't. Which is quite funny. And the dumb show preceding The Mousetrap play is extravagantly a memorably weird, featuring a fat, bald transvestite in grotesque make-up as the queen, teetering around amid high-pitched giggles, his moobies straining obscenely over the top of his bodice. The king is a hairy little dwarf with huge ears, and the poisoner a laughing acrobat sliding down a rope from the rafters. David Lynch must have had a hand in this somewhere.

There is one minor problem that might need ironing out. Patrick Stewart's dignified Ghost has some kind of widget up his skirts that pumps out dry ice, surrounding him with dramatic clouds sulphurous smog. Except that the pump seems to be located somewhere around his bottom, so that every time he moves, another little puff emerges from his neither regions. To certain vulgar groundlings, like me, this risks making him look more like Viz magazine's Johnny Fartpants than Hamlet's noble father. We do it wrong being so majestical, to think it capable of flatulence.