Face to Face with Fraser Hines 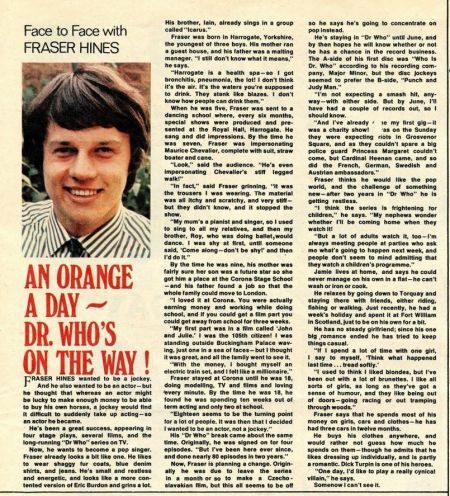 FRASER HINES wanted to be a jockey. And he also wanted to be an actor—but he thought that whereas an actor might be lucky to make enough money to be able to buy his own horses, a jockey would find it difficult to suddenly take up acting—so an actor he became.

He's been a great success, appearing in four stage plays, several films, and the long-running "Dr Who" series on TV.

Now, he wants to become a pop singer. Fraser already looks a bit like one. He likes to wear shaggy fur coats, blue denim shirts, and jeans. He's small and restless and energetic, and looks like a more contented version of Eric Burdon and grins a lot. His brother, lain, already sings In a group called "Icarus."

Fraser was born in Harrogate, Yorkshire, the youngest of three boys. His mother ran a guest house, and his father was a malting manager. "I still don't know what it means," he says.

"Harrogate is a health spa—so I got bronchitis, pneumonia, the lot! I don't think It's the air. It's the waters you're supposed to drink. They stank like blazes. I don't know how people can drink them."

When he was five, Fraser was sent to a dancing school where, every six months, special shows were produced and presented at the Royal Hail, Harrogate. He sang and did impressions. By the time he was seven, Fraser was Impersonating Maurice Chevalier, complete with suit, straw boater and cane.

"In fact," said Fraser grinning, "it was the trousers I was wearing. The material was all itchy and scratchy, and very stiff—but they didn't know, and it stopped the show.

"My mum's a pianist and singer, so I used to sing to all my relatives, and then my brother, Roy, who was doing ballet, would dance. I was shy at first, until someone said. 'Come along—don't be shy!' and then I'd do it"

By the time he was nine, his mother was fairly sure her son was a future star so she got him a place at the Corona Stage School —and his father found a job so that the whole family could move to London.

"I loved it at Corona. You were actually earning money and working while doing school, and If you could get a film part you could get away from school for three weeks.

"My first part was in a film called 'John and Julie.' I was the 105th citizen! I was standing outside Buckingham Palace waving, just one in a sea of laces—but I thought it was great, and all the family went to see it

"With the money, I bought myself an electric train set, and I felt like a millionaire."

Fraser stayed at Corona until he was 18. doing modelling, TV and films and loving 'every minute. By the time he was 18, he found he was spending ten weeks out of term acting and only two at school.

"Eighteen seems to be the turning point for a lot of people. It was then that I decided I wanted to be an actor, not a jockey."

His "Dr Who" break came about the same time. Originally, he was signed on for four episodes. "But I've been here ever since, and done nearly 80 episodes in two years."

Now, Fraser is planning a change. Originally he was due to leave the series in a month or so to make a Czechoslovakian film, but this all seems to be off so he says he's going to concentrate on pop instead.

He's staying in "Dr Who" until June, and by then hopes he will know whether or not he has a chance in the record business. The A-side of his first disc was "Who Is Dr. Who" according to his recording company, Major Minor, but the disc jockeys seemed to prefer the B-side, "Punch and Judy Man."

"I'm not expecting a smash hit, anyway—with either side. But by June, I'll have had a couple of records out, so I should know.

"And I've already done my first gig—it was a charity show! [...] on the Sunday they were expecting riots in Grosvenor Square, and as they couldn't spare a big police guard Princess Margaret couldn't come, but Cardinal Heenan came, and so did the French, German, Swedish and Austrian ambassadors."

Fraser thinks he would like the pop world, and the challenge of something new—after two years In "Dr Who" he is getting restless.

"I think the series is frightening for children," he says. "My nephews wonder whether I'll be coming home when they watch it!

"But a lot of adults watch It, too—I'm always meeting people at parties who ask me what's going to happen next week, and people don't seem to mind admitting that they watch a children's programme."

Jamie lives at home, and says he could never manage on his own in a flat—he can't wash or iron or cook.

He relaxes by going down to Torquay and staying there with friends, either riding, fishing or walking. Just recently, he had a week's holiday and spent it at Fort William in Scotland, just to be on his own for a bit.

He has no steady girlfriend; since his one big .romance ended he has tried to keep things casual.

"If I spend a lot of time with one girl, I say to myself, 'Think what happened last time ... tread softly.'

"I used to think I liked blondes, but I've been out with a lot of brunettes. I like all sorts of girls, as long as they've got a sense of humour, and they like being out of doors—going racing or out tramping through woods."

Fraser says that he spends most of his money on girls, cars and clothes—he has had three cars in twelve months.

He buys his clothes anywhere, and would rather not guess how much ho spends on them—though he admits that he likes dressing up individually, and is partly a romantic. Dick Turpin is one of his heroes.

"One day, I'd like to play a really cynical villain," he says.

Somehow I can't see it.