Fall in love with 'Doctor Who' all over again at library 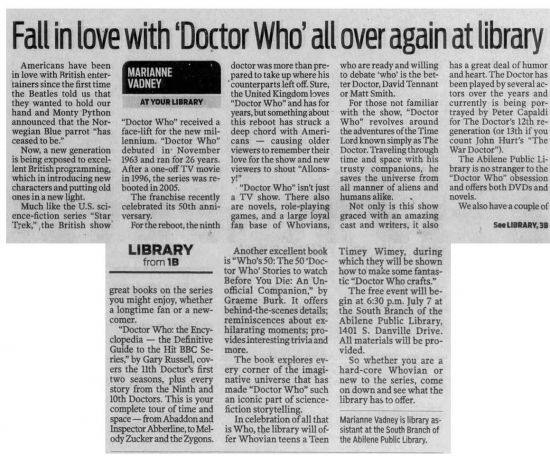 Americans have been in love with British entertainers since the first time the Beatles told us that they wanted to hold our hand and Monty Python announced that the Norwegian Blue parrot "has ceased to be."

Now, a new generation is being exposed to excellent British programming, which in introducing new characters and putting old ones in a new light.

Much like the U.S. science-fiction series "Star Trek," the British show "Doctor Who" received a face-lift for the new millennium. "Doctor Who" debuted in November 1963 and ran for 26 years. After a one-off TV movie in 1996, the series was rebooted in 2005.

For the reboot, the ninth doctor was more than prepared to take up where his counterparts left off. Sure, the United Kingdom loves "Doctor Who" and has for years, but something about this reboot has struck a deep chord with Americans — causing older viewers to remember their love for the show and new viewers to shout "Allons-y!"

"Doctor Who" isn't just a TV show. There also are novels, role-playing games, and a large loyal fan base of Whovians, who are ready and willing to debate 'who' is the better Doctor, David Tennant or Matt Smith.

For those not familiar with the show, "Doctor Who" revolves around the adventures of the Time Lord known simply as The Doctor. Traveling through time and space with his trusty companions, he saves the universe from all manner of aliens and humans alike.

Not only is this show graced with an amazing cast and writers, it also has a great deal of humor and heart. The Doctor has been played by several actors over the years and currently is being portrayed by Peter Capaldi for The Doctor's 12th regeneration (or 13th if you count John Hurt's "The War Doctor").

The Abilene Public Library is no stranger to the "Doctor Who" obsession and offers both DVDs and novels.

We also have a couple of great books on the series you might enjoy, whether a longtime fan or a newcomer.

"Doctor Who: the Encyclopedia — the Definitive Guide to the Hit BBC Series," by Gary Russell, covers the 11th Doctor's first two seasons, plus every story from the Ninth and 10th Doctors. This is your complete tour of time and space — from Abaddon and Inspector Abberline, to Melody Zucker and the Zygons.

Another excellent book is "Who's 50: The 50 'Doctor Who' Stories to watch Before You Die: An Unofficial Companion," by Graeme Burk. It offers behind-the-scenes details; reminiscences about exhilarating moments; provides interesting trivia and more.

The book explores every corner of the imaginative universe that has made "Doctor Who" such an iconic part of science-fiction storytelling.

In celebration of all that is Who, the library will offer Whovian teens a Teen Timey Wimey, during which they will be shown how to make some fantastic "Doctor Who crafts."

The free event will begin at 6:30 p.m. July 7 at the South Branch of the Abilene Public Library, 1401 S. Danville Drive. All materials will be provided.

So whether you are a hard-core Whovian or new to the series, come on down and see what the library has to offer.

Marianne Vadney is library assistant at the South Branch of the Abilene Public Library.