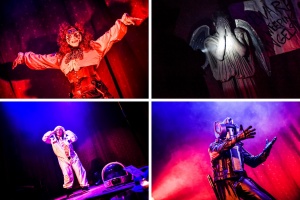 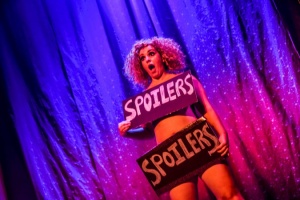 At the Slipper Room in Manhattan, performers put on tributes to movies and shows in a pop-culture twist on burlesque called nerdlesque, which has a following in New York. Above, three performers pay homage to "Doctor Who," a BBC series. Top, Lil' Miss Lixx during a midnight neoburlesque show.

In nerdlesque, a pop-culture twist on burlesque, performers shed garters (and more) to pay tribute to movies and shows.

Onstage at the Slipper Room this month, Lilly Hayes, the performer known as Miranda Raven, kicked off her black moon boots before zipping out of her astronaut costume to reveal a pair of jeans, white button-down shirt and denim jacket — the signature look of River Song, a character from "Doctor Who."

The theater that Thursday night was filled with fans of the BBC series — Whovians, as they call themselves — hooting and applauding at a noise level befitting a boxing match, as Ms. Hayes unabashedly jumped, swiveled, rolled on the floor and shimmied her way around the stage in time with Pink's "Trouble."

By the end of the song, her jeans, shirt, jacket and space gear strewed the floor. Ms. Hayes was naked, holding up two black signs that said "Spoilers" — River Song's catchphrase — over her breasts and pubic area.

Welcome to nerdlesque, the geeky, pop-culture offshoot of burlesque that grew out of the art form's 1990s renaissance. Rather than luring crowds through feminine beauty and glamour, nerdlesque, which has been compared to fan fiction, lets them revel in their nerdoms among like-minded people. It has gained such a following in New York City that it got its own festival in 2014.

Hotsy Totsy Burlesque, which hosted the tribute to "Doctor Who," has a lengthy catalog of shows that riff on movies, books and recent TV hits like "Mad Men" and "American Horror Story," as well as classics like "The Muppets" and "Golden Girls." Its Harry Potter tributes — this year's was "Harry Potter and the Cursed Pastie: Parts Left and Right" — sell out, and every December the group skewers "The Star Wars Holiday Special," the ill-fated 1978 TV movie George Lucas would surely like to forget.

And if not everyone in the audience understands the inside jokes, deep cuts and nods to source material, that's O.K. — the performers' sincerity and the audience's excitement are entertainment enough.

"We tend to stick with the things that we love ourselves, that we're true fans of," said Joseph Naftali, who works at a costume company. He helped create Hotsy Totsy 10 years ago and co-produces its shows. "We're always paying homage to these things, we're not making fun of them."

Last summer, the Brooklyn-based Metropolis Burlesque held a show celebrating the Netflix series "BoJack Horseman" at the Slipper Room. The performer known as Petite Renard, who withheld her name out of concern for her personal safety, began her act by pretending to snort coke off a tray before stripping down to a purple muffin-shaped merkin to the Dandy Warhols' "Not If You Were the Last Junkie on Earth."

The references delighted fans in the audience, who instantly recognized her as one of the show's characters: Sarah Lynn, a drug-addicted, former child actress who released a highly sexualized single titled "Prickly Muffin." And for non-fans, it was still an opportunity to see a curvy woman's nearly naked body.

The burlesque performer known as Moe Cheezmo, who did not want to reveal his name for fear of losing his job, said the appeal of nerdlesque for fans is that it is more fun — and risque — than just talking plot points and exchanging finale predictions.

"If you're doing a staged version of a 'BoJack Horseman' fan fiction, no one is going to come to that," he said.

But put nudity into the mix, and you're giving people a forum for a kind of sexual exploration that seems less lewd than a strip show. "They can square it in their head with their own value system," he said. "I'm not going to exploit people who are taking their clothes off," he added, "I'm going to support my fandom."

Until 1942, burlesque in New York City was defined by glamorous women performing strip teases. That's when the last burlesque house shut down, following Mayor Fiorello H. La Guardia's lengthy campaign to rid the city of vice. In the late '90s, as Mayor Rudolph W. Giuliani fought a battle similar to his predecessor's, artists were reviving burlesque and transforming it into an outlet for self-expression and social commentary. Its goals were no longer solely to satisfy the male gaze or provide an escape from reality. It became a kind of performance art.

Neoburlesque, as it's known, also embraced performers whose bodies, sexual identities and ages weren't often seen onstage. This is even more the case with nerd-lesque.

When Cyndi Freeman, a writer and podcast producer who plays the ditsy, pink-haired Cherry Pitz in Hotsy Totsy shows, joined the burlesque community a decade ago at 43, it was a defiant act against ageism and a declaration of pride for her body.

Ms. Freeman and her husband, Brad Lawrence, put on monthly nerdlesque shows at the Slipper Room, on the Lower East Side, which has served as a home to neoburlesque since 1999. Mr. Lawrence wrote in an email that, aside from some gentle ribbing, relationships between nerds like him and the more avant-garde performers have been supportive. "But maybe I just never cared enough to find out that people were genuinely mad because I was having too much fun."

At the end of the "Doctor Who" show that night, Ms. Freeman, wearing her signature pink bouffant wig, seductively removed her fishnet stockings, black tutu and silky blue corset — which recalled the police box the Doctor uses for time travel — to reveal a black thong and light-up nipple covers. A few minutes later Mr. Lawrence, dressed as the Tenth Doctor, re-emerged for some witty banter and Whovian humor.

Before the performance, Mr. Lawrence had considered why people came to these shows. "Life is hard, and work is tedious," he had said. Fans watch a funny strip tease with their favorite characters, they laugh, they drink. "They feel better at the end of it. If that is the only thing I can contribute to the world, that's fine."

Caption: From top, Cyndi Freeman, known as Cherry Pitz onstage, before a "Doctor Who"-themed burlesque show at the Slipper Room in Manhattan; a participant during the tribute, which was hosted by Hotsy Totsy Burlesque; and Lilly Hayes as River Song, a "Doctor Who" character.