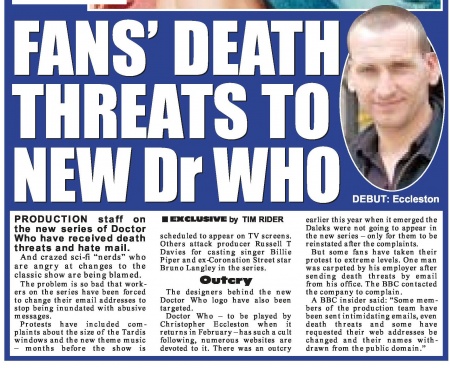 PRODUCTION staff on the new series of Doctor Who have received death threats and hate mail.

And crazed sci-fi "nerds" who are angry at changes to the classic show are being blamed. The problem is so bad that workers on the series have been forced to change their email addresses to stop being inundated with abusive messages.

Protests have included complaints about the size of the Tardis windows and the new theme music — months before the show is scheduled to appear on TV screens. Others attack producer Russell T Davies for casting singer Billie Piper and ex-Coronation Street star Bruno Langley in the series.

The designers behind the new Doctor Who logo have also been targeted.

Doctor Who — to be played by Christopher Eccleston when it returns in February —has such a cult following, numerous websites are devoted to it. There was an outcry

earlier this year when it emerged the Daleks were not going to appear in the new series — only for them to be reinstated after the complaints.

But some fans have taken their protest to extreme levels. One man was carpeted by his employer after sending death threats by email from his office. The BBC contacted the company to complain.

A BBC insider said: "Some members of the production team have been sent intimidating emails, even death threats and some have requested their web addresses be changed and their names withdrawn from the public domain."