Fans already know who this doctor is 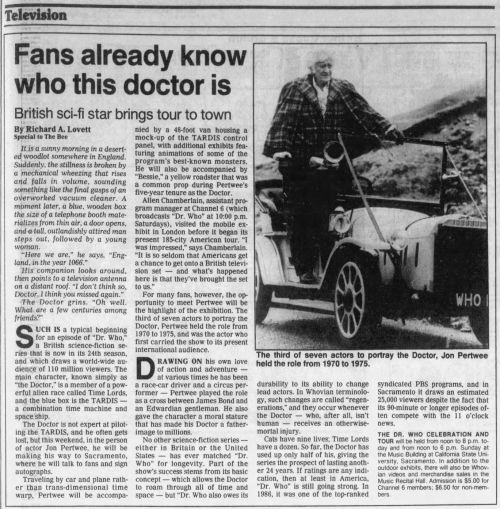 It is a sunny morning in a deserted woodlot somewhere in England. Suddenly, the stillness is broken by a mechanical wheezing that rises and falls in volume, sounding something like the final gasps of an overworked vacuum cleaner. A moment later, a blue, wooden box the size of a telephone booth materializes from thin air, a door opens, and a tall, outlandishly attired man steps out, followed by a young woman.

His companion looks around, then points to a television antenna on a distant roof. "I don't think so, Doctor. I think you missed again."

The Doctor grins. "Oh well. What are a few centuries among friends?"

SUCH IS a typical beginning for an episode of "Dr. Who," a British science-fiction series that is now in its 24th season, and which draws a world-wide audience of 110 million viewers. The main character, known simply as "the Doctor," is a member of a powerful alien race called Time Lords, and the blue box is the TARDIS —a combination time machine and space ship.

The Doctor is not expert at piloting the TARDIS, and he often gets lost, but this weekend, in the person of actor Jon Pertwee, he will be making his way to Sacramento, where he will talk to fans and sign autographs.

Traveling by car and plane rather than trans-dimensional time warp, Pertwee will be accompanied by a 48-foot van housing a mock-up of the TARDIS control panel, with additional exhibits featuring animations of some of the program's best-known monsters. He will also be accompanied by "Bessie," a yellow roadster that was a common prop during Pertwee's five-year tenure as the Doctor.

Allen Chamberlain, assistant program manager at Channel 6 (which broadcasts "Dr. Who" at 10:00 p.m. Saturdays), visited the mobile exhibit in London before it began its present 185-city American tour. "I was impressed," says Chamberlain. "It is so seldom that Americans get a chance to get onto a British television set — and what's happened here is that they've brought the set to us."

For many fans, however, the opportunity to meet Pertwee will be the highlight of the exhibition. The third of seven actors to portray the Doctor, Pertwee held the role from 1970 to 1975, and was the actor who first carried the show to its present international audience.

DRAWING ON his own love of action and adventure —at various times he has been a race-car driver and a circus performer — Pertwee played the role as a cross between James Bond and an Edwardian gentleman. He also gave the character a moral stature that has made his Doctor a father-image to millions.

No other science-fiction series — either in Britain or the United States — has ever matched "Dr. Who" for longevity. Part of the show's success stems from its basic concept — which allows the Doctor to roam through all of time and space — but "Dr. Who also owes its durability to its ability to change lead actors. In Whovian terminology, such changes are called "regenerations," and they occur whenever the Doctor — who, after all, isn't human — receives an otherwise-mortal injury.

Cats have nine lives; Time Lords have a dozen. So far, the Doctor has used up only half of his, giving the series the prospect of lasting another 24 years. If ratings are any indication, then at least in America, "Dr. Who" is still going strong. In 1986, it was one of the top-ranked syndicated PBS programs, and in Sacramento it draws an estimated 25,000 viewers despite the fact that its 90-minute or longer episodes often compete with the 11 o'clock news.

THE DR. WHO CELEBRATION AND TOUR will be held from noon to 8 p.m. today and from noon to 6 p.m. Sunday at the Music Building at California State University, Sacramento. In addition to the outdoor exhibits, there will also be Whovian videos and merchandise sales in the Music Recital Hall. Admission is $5.00 for Channel 6 members: $6.50 for non-members.

The third of seven actors to portray the Doctor, Jon Pertwee, held the role from 1970 to 1975.