Far from the Tardis 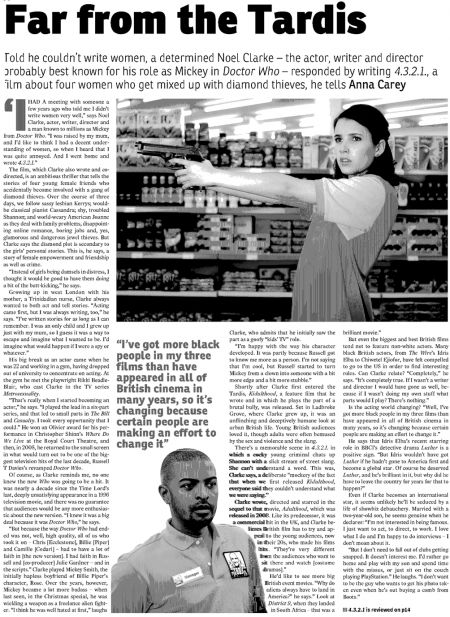 Told he couldn't write women, a determined Noel Clarke — the actor, writer and director probably best known for his role as Mickey in Doctor Who — responded by writing 4.3.2.1., a film about four women who get mixed up with diamond thieves, he tells Anna Carey

I HAD A meeting with someone a few years ago who told me I didn't write women very well," says Noel Clarke, actor, writer, director and a man known to millions as Mickey from Doctor Who. "I was raised by my mum, and I'd like to think I had a decent understanding of women, so when I heard that I was quite annoyed. And I went home and wrote 4.3.2.1"

The film, which Clarke also wrote and co-directed, is an ambitious thriller that tells the stories of four young female friends who accidentally become involved with a gang of diamond thieves. Over the course of three days, we follow sassy lesbian Kerrys; would-be classical pianist Cassandra; shy, troubled Shannon; and world-weary American Joanne as they deal with family problems, disappointing online romance, boring jobs and, yes, glamorous and dangerous jewel thieves. But Clarke says the diamond plot is secondary to the girls' personal stories. This is, he says, a story of female empowerment and friendship as well as crime.

"Instead of girls being damsels in distress, I thought it would be good to have them doing a bit of the butt-kicking," he says.

Growing up in west London with his mother, a Trinidadian nurse, Clarke always wanted to both act and tell stories. "Acting came first, but I was always writing, too," he says. "I've written stories for as long as I can remember. I was an only child and I grew up just with my mum, so I guess it was a way to escape and imagine what I wanted to be. I'd imagine what would happen if I were a spy or whatever."

His big break as an actor came when he was 22 and working in a gym, having dropped out of university to concentrate on acting. At the gym he met the playwright Rikki Beadle-Blair, who cast Clarke in the TV series Metrosexuality.

"That's really when I started becoming an actor," he says. "I played the lead in a six-part series, and that led to small parts in The Bill and Casualty. I took every opportunity that I could." He won an Olivier award for his performance in Christopher Shinn's Where Do We Live at the Royal Court Theatre, and then, in 2005, he returned to the small screen in what would turn out to be one of the biggest television hits of the last decade, Russell T Davies's revamped Doctor Who.

Of course, as Clarke reminds me, no one knew the new Who was going to be a hit. It was nearly a decade since the Time Lord's last, deeply unsatisfying appearance in a 1996 television movie, and there was no guarantee that audiences would be any more enthusiastic about the new version. "I knew it was a big deal because it was Doctor Who," he says.

"But because the way Doctor Who had ended was not, well, high quality, all of us who took it on - Chris [Ecclestone], Billie [Piper] and Camille [Coduri] - had to have a lot of faith in [the new version]. I had faith in Russell and [co-producer] Julie Gardner - and in the scripts." Clarke played Mickey Smith, the initially hapless boyfriend of Billie Piper's

character, Rose. Over the years, however, Mickey became a lot more badass - when last seen, in the Christmas special, he was wielding a weapon as a freelance alien fighter. "I think he was well hated at first," laughs Clarke, who admits that he initially saw the part as a goofy "kids' TV" role.

"I'm happy with the way his character developed. It was partly because Russell got to know me more as a person. I'm not saying that I'm cool, but Russell started to turn Mickey from a clown into someone with a bit more edge and a bit more stubble."

Shortly after Clarke first entered the Tardis, Kidulthood, a feature film that he wrote and in which he plays the part of a brutal bully, was released. Set in Ladbroke Grove, where Clarke grew up, it was an unflinching and deceptively humane look at urban British life. Young British audiences loved it, though adults were often bemused by the sex and violence and the slang.

There's a memorable scene in 4.3.2.1. in which a cocky young criminal chats up Shannon with a slick stream of street slang. She can't understand a word. This was, Clarke says, as deliberate "mockery of the fact that when we first released Kidulthood, everyone said they couldn't understand what we were saying."

Clarke wrote, directed and starred in the sequel to that movie, Adulthood, which was released in 2008. Like its predecessor, it was hit in the UK, and Clarke believes British film has to try and appeal to the young audiences, now in their 20s, who made his films hits. "They're very different from the audiences who want to sit there and watch [costume dramas]."

He'd like to see more big British event movies. "Why do aliens always have to land in America?" he says." Look at District 9, when they landed in South Africa - that was a brilliant movie."

But even the biggest and best British films tend not to feature non-white actors. Many black British actors, from The Wires Idris Elba to Chiwetel Ejiofor, have felt compelled to go to the US in order to find interesting roles. Can Clarke relate? "Completely," he says. "It's completely true. If I wasn't a writer and director I would have gone as well, because if I wasn't doing my own stuff what parts would I play? There's nothing."

Is the acting world changing? "Well, I've got more black people in my three films than have appeared in all of British cinema in many years, so it's changing because certain people are making an effort to change it."

He says that Idris Elba's recent starring role in BBC1's detective drama Luther is a positive sign. "But Idris wouldn't have got Luther if he hadn't gone to America first and become a global star. Of course he deserved Luther, and he's brilliant in it, but why did he have to leave the country for years for that to happen?"

Even if Clarke becomes an international star, it seems unlikely he'll be seduced by a life of showbiz debauchery. Married with a two-year-old son, he seems genuine when he declares: "I'm not interested in being famous. I just want to act, to direct, to work. I love what I do and I'm happy to do interviews - I don't moan about it.

"But I don't need to fall out of clubs getting snapped. It doesn't interest me. I'd rather go home and play with my son and spend time with the missus, or just sit on the couch playing PlayStation." He laughs. "I don't want to be the guy who wants to get his photo taken even when he's out buying a comb from Boots."