Farewell to the fantasy factory 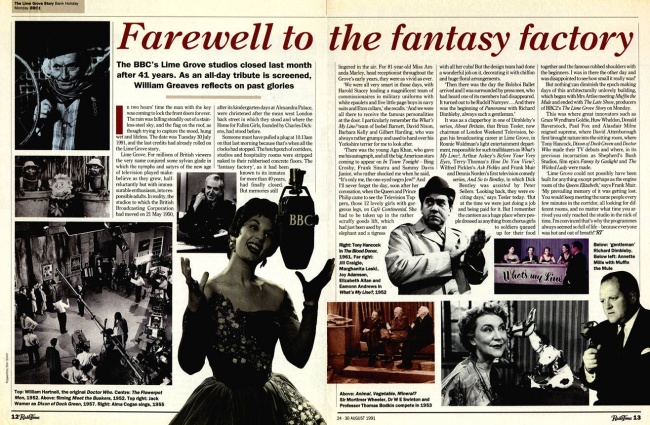 The BBC's Lime Grove studios closed last after 41 years. As an all-day tribute is screened William Greaves reflects on past glories

In two hours' time the man with the key was coming to lock the front doors for ever. The rain was falling steadily out of a stainless-steel sky, and the flag on the roof, as though trying to capture the mood, hung wet and lifeless. The date was Tuesday 30 July 1991, and the last credits had already rolled on the Lime Grove story.

Lime Grove. For millions of British viewers the very name conjured some sylvan glade in which the nymphs and satyrs of the new age of television played make-believe as they grew, half-reluctantly but with immeasurable enthusiasm, into responsible adults. In reality, the studios to which the British Broadcasting Corporation had moved on 21 May 1950, after its kindergarten days at Alex were christened after the mean west back street in which they stood and Home for Fallen Girls, founded by Charles Dickens, had stood before.

Someone must have pulled a plug at 10:13am on that last morning because that's clocks had stopped. The hotchpotch of corridors, studios and hospitality rooms were stripped naked to their rubberised concrete floors. The 'fantasy factory', as it had been known to its inmates for more than 40 years, had finally closed. But memories still lingred in the air. For 81-year-old Miss Amanda Marley, head receptionist throughout the Grove's early years, they were as vivid as ever.

'We were all very smart in those days, with Harold Stacey leading a magnificent team of commissionaires in military uniforms with white epaulets and five little page boys in navy and Eton collars,' she recalls. 'And we were all there to receive the famous personalities at the door. I particularly remember the What's My Line? team of Isobel Barnett, David Nixon, Barbara Kelly and Gilbert Harding, who was always rather grumpy and used to hand over his Yorkshire terrier for me to look after.

'There was the young Aga Khan, who gave his autograph, and all the big American stars coming to appear on In Town Tonight — Bing Crosby, Frank Sinatra and Sammy Davis Junior, who rather shocked me when he said, "It's only me, the one-eyed negro Jew!" And I'll never forget the day, soon after her coronation, when the Queen and Prince Philip came to see the Television Toppers, those 12 lovely girls with gorgeous legs, on Café Continental. She to be taken up in the rather scruffy goods lift, which must been used by an elephant and a tigress with all her cubs! But the design team had done a wonderful job on it, decorating it with chiffon and huge floral arrangements.

'Then there was the day the Bolshoi Ballet arrived and I was surrounded by press men, who had heard one of its members had disappeared. It turned out to be Rudolf Nureyev... And there was the beginning of Panorama with Richard Dimbleby, always such a gentleman.'

It was as a clapperboy in one of Dimbleby's series, About Britain, that Brian Tesler, now chairman of London Weekend Television, began his broadcasting career at Lime Grove, in Ronnie Waldman's light entertainment department, responsible for such trailblazers as What's My Line?, Arthur Askey's Before Your Very Eyes, Terry-Thomas's How Do You View?, Wilfred Pickles's Ask Pickles and Frank Muir and Dennis Norden's first television comedy series, And So to Bentley, in which Dick Bentley was assisted by Peter Sellers. 'Looking back, they were exciting days,' says Tesler today. 'But at the time we were just doing a job and being paid for it. But I remember the canteen as a huge place where people dressed as anything from chorus girls to soldiers queued up for their food together and the famous rubbed shoulders with the beginners. I was in there the other day and was disappointed to see how small it really was!'

But nothing can diminish the epoch-making days of this architecturally unlovely building, which began with Mrs Attlee meeting Muffin the Mule and ended with The Late Show, producers of BBC2's The Lime Grove Story on Monday.

This was where great innovators such as Grace Wyndham Goldie, Huw Wheldon, Donald Baverstock, Paul Fox and Alasdair Milne reigned supreme, where David Attenborough first brought nature into the sitting-room, where Tony Hancock, Dixon of Dock Green and Doctor Who made their TV debuts and where, in its previous incarnation as Shepherd's Bush Studios, film epics Fanny by Gaslight and The Wicked Lady were made.

'Lime Grove could not possibly have been built for anything except perhaps as the engine room of the Queen Elizabeth,' says Frank Muir. 'My prevailing memory of it was getting lost. You would keep meeting the same people every few minutes in the corridor, all looking for different rooms, and no matter what time you arrived you only reached the studio in the nick of time. I'm convinced that's why the programmes always seemed so full of life — because everyone was hot and out of breath!'

Below: 'gentleman' Richard Dimbleby. Below left: Annette Mills with Muffin the Mule