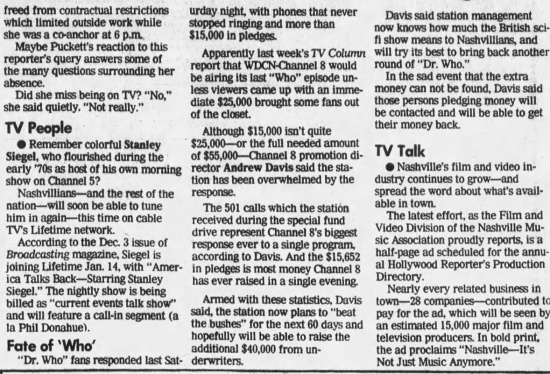 "Dr. Who" fans responded last Saturday night, with phones that never stopped ringing and more than $15,000 in pledges.

Apparently last week's TV Column report that WDCN-Channel 8 would be airing its last "Who" episode unless viewers came up with an immediate $25,000 brought some fans out of the closet.

Although $15,000 isn't quite $25,000—or the full needed amount of $55,000—Channel 8 promotion director Andrew Davis said the station has been overwhelmed by the response.

The 501 calls which the station received during the special fund drive represent Channel 8's biggest response ever to a single program, according to Davis. And the $15,652 in pledges is most money Channel 8 has ever raised in a single evening.

Armed with these statistics. Davis said, the station now plans to "beat the bushes" for the next 60 days and hopefully will be able to raise the additional $40,000 from underwriters.

Davis said station management now knows how much the British sci-fi show means to Nashvillians, and will try its best to bring back another round of "Dr. Who."

In the sad event that the extra money can not be found, Davis said those persons pledging money will be contacted and will be able to get their money back.