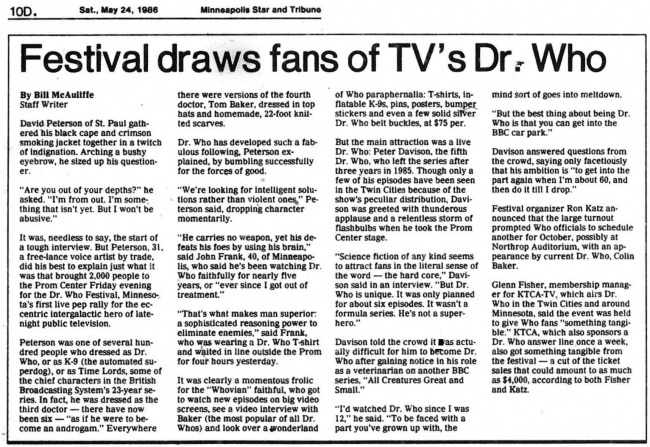 David Peterson of St. Paul gathered his black cape and crimson smoking jacket together in a twitch of indignation. Arching a bushy eyebrow, he sized up his questioner.

It was, needless to say, the start of a tough interview. But Peterson, 31, a free-lance voice artist by trade, did his best to explain just what it was that brought 2,000 people to the Prom Center Friday evening for the Dr. Who Festival, Minnesota's first live pep rally for the eccentric intergalactic hero of late-night public television.

Peterson was one of several hundred people who dressed as Dr. Who, or as K-9 (the automated superdog), or as Time Lords, some of the chief characters in the British Broadcasting System's 23-year series. In fact, he was dressed as the third doctor - there have now been six - "as if he were to become an androgam." Everywhere there were versions of the fourth doctor, Tom Baker, dressed in top hats and homemade, 22-foot knitted scarves.

Dr. Who has developed such a fabulous following, Peterson explained, by bumbling successfully for the forces of good.

"He carries no weapon, yet his defeats his foes by using his brain," said John Frank, 40, of Minneapolis, who said he's been watching Dr. Who faithfully for nearly five years, or "ever since I got out of treatment."

"That's what makes man superior: a sophisticated reasoning power to eliminate enemies," said Frank, who was wearing a Dr. Who T-shirt and waited in line outside the Prom for four hours yesterday.

It was clearly a momentous frolic for the "Whovian" faithful, who got to watch new episodes on big video screens, see a video interview with Baker (the most popular of all Dr. Whos) and look over a wonderland of Who paraphernalia: T-shirts, inflatable K-9s, pins, posters, bumper stickers and even a few solid silver Dr. Who belt buckles, at $75 per.

But the main attraction was a live Dr. Who: Peter Davison, the fifth Dr. Who, who left the series after three years in 1985. Though only a few of his episodes have been seen in the Twin Cities because of the show's peculiar distribution, Davison was greeted with thunderous applause and a relentless storm of flashbulbs when he took the Prom Center stage.

"Science fiction of any kind seems to attract fans in the literal sense of the word - the hard core," Davison said in an interview. "But Dr. Who is unique. It was only planned for about six episodes. It wasn't a formula series. He's not a superhero."

Davison told the crowd it was actually difficult for him to become Dr. Who after gaining notice in his role as a veterinarian on another BBC series, "All Creatures Great and Small."

"I'd watched Dr. Who since I was 12," he said. "To be faced with a part you've grown up with, the mind sort of goes into meltdown.

"But the best thing about being Dr. Who is that you can get into the BBC car park."

Davison answered questions from the crowd, saying only facetiously that his ambition is "to get into the part again when I'm about 60, and then do it till I drop."

Festival organizer Ron Katz announced that the large turnout prompted Who officials to schedule another for October, possibly at Northrop Auditorium, with an appearance by current Dr. Who, Colin Baker.

Glenn Fisher, membership manager for KTCA-TV, which airs Dr. Who in the Twin Cities and around Minnesota, said the event was held to give Who fans "something tangible." KTCA, which also sponsors a Dr. Who answer line once a week, also got something tangible from the festival - a cut of the ticket sales that could amount to as much as $4,000, according to both Fisher and Katz.