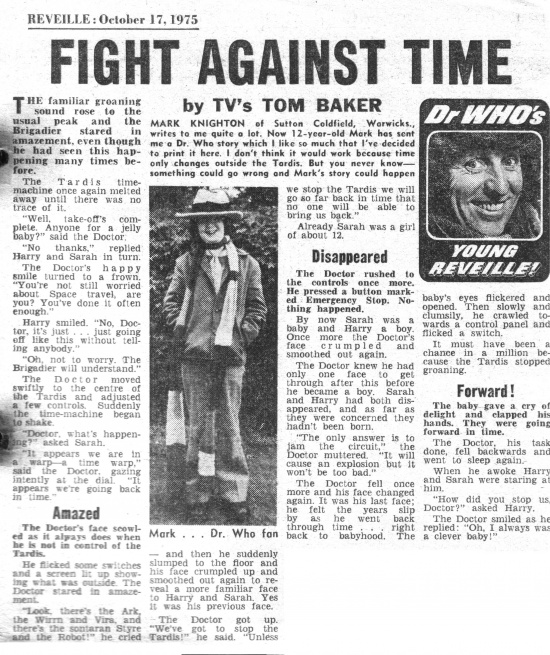 Mark Knighton of Sutton Coldfield, Warwicks., writes to me quite a lot. Now 12-year-old Mark has sent me a Doctor Who story which I like so much that I've decided to printed here. I don't think it would work because time only changes outside the TARDIS. But you never know something could go wrong and marks its story could happen it.

The familiar groaning sound rose to the usual peak and the Brigadier stared in amazement, even though he is seen this happen in many times before.

The TARDIS time machine once again melted away until there was no trace of it.

"Well, takeoff's complete. Anyone for jelly baby?" said the Doctor.

"No thanks," replied Harry and Sarah in turn.

The Doctor's happy smile turned to a frown. "You're not still worried about space travel, are you? You've done it often enough."

Harry smile. "No, Doctor, It's just ... just going off like this without telling anybody."

"Oh, not to worry. The Brigadier will understand."

The Doctor moved swiftly to the center of the Tardis and adjusted a few controls. Suddenly the time-machine began to shake.

The Doctor's face scowled at it always does when he's not in control of the TARDIS.

He flicks and switches and a screen lit up showing what was outside. The Doctor stared in amazement.

"Look, there's the Ark, the Wirren, and Vira, and there's the Sontaran Styre and the robot!" he cried-- and then he suddenly slumped to the floor and his face crumpled up and smoothed out again to reveal a more familiar face to Harry and Sarah. Yes it was his previous face.

The Doctor got up. "We've got to stop the Tardis!" he said. "Unless we stop the TARDIS we will go so far back in time that no one will be able to bring us back."

But already Sarah was a girl of about 12.

The Doctor rushed to the controls once more. He pressed a button marked emergency stop. Nothing happened.

By no Sarah was a baby and Harry was a boy. Once more the doctor's face crumpled and smooth out again.

The Doctor knew he had only one face to get through after this before he became a boy. Sarah and Harry and both disappeared, and as far as they were concerned they have been born.

The only answer is to jam the circuit, the Doctor muttered. It will cause an explosion but it won't be too bad.

The Doctor fell once more and his face changed again. It was his last race; he felt the year slipped by as he went back through time... right back to babyhood. The baby's eyes record and opened. Then slowly and clumsily, he crawled toward a control panel and flipped the switch.

It must have been a chance in a million because the TARDIS stopped growing groaning.

The baby gave a crime to like and clapped his hands. They were going forward in time.

The Doctor, his task done, fell backwards and went to sleep again.

It cut when he awoke Harry and Sarah were staring at him.

"How did you stop us, Doctor?" asked Harry.

The Doctor smiled as he replied: "Oh, I always was a clever baby!"