For Penn-Princeton Viewers, the Final Gun Sounded at 4 O'Clock 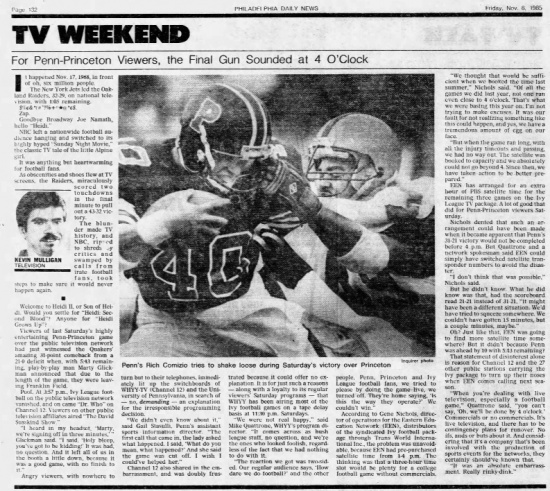 It was anything but heartwarming for football fans.

As obscenities and shoes flew at TV screens, the Raiders, miraculously scored two touchdowns in the final minute to pull out a 43-32 victory.

The blunder made TV history, and NBC, ripped to shreds by critics and swamped by calls from irate football fans, took steps to make sure it would never happen again.

Welcome to Heidi II, or Son of Heidi. Would you settle for "Heidi: Second Blood"? Anyone for "Heidi Grows Up"?

Viewers of last Saturday's highly entertaining Penn-Princeton game over the public television network had just witnessed the Quakers' amazing 31-point comeback from a 21-0 deficit when, with 5:43 remaining, play-by-play man Marty Glickman announced that due to the length of the game, they were leaving Franklin Field.

"I heard in my headset. 'Marty. we're signing off in three minutes,'" Glickman said. "I said. 'Holy bleep. you've got to be kidding!' It was bad, no question. And it left all of us in the booth a little down, because it was a good game, with no finish to it."

Angry viewers, with nowhere to turn but to their telephones, immediately lit up the switchboards of WHYY-TV (Channel 12) and the University of Pennsylvania, in search of — no, demanding — an explanation for the irresponsible programming decision.

"We didn't even know about it," said Gail Stasulli. Penn's assistant sports information director. "The first call that came in. the lady asked what happened_ I said, 'What do you mean. what happened?' And she said the game was cut off. I wish I could've helped her."

Channel 12 also shared in the embarrassment, and was doubly frustrated because it could offer no explanation. It is for just such a reasons — along with a loyalty to its regular viewers' Saturday programs — that WHYY has been airing most of the Ivy football games on a tape delay basis at 11:30 p.m. Saturdays.

"We were not real happy," said Mike Quattrone, WHYY's program director. "It comes across as bush league stuff, no question, and we're the ones who looked foolish, regardless of the fact that we had nothing to do with it.

"The reaction we got was two-sided. Our regular audience says. 'How dare we do football?' and the other people, Penn, Princeton and Ivy League football fans, we tried to please by doing the game live, we turned off. They're home saying, 'Is this the way they operate?' We couldn't win."

According to Gene Nichols, director of operations for the Eastern Education Network (EEN), distributors of the syndicated Ivy football package through Trans World International Inc., the problem was unavoidable, because EEN had pre-purchased satellite time from 14 p.m. The thinking was that a three-hour time slot would be plenty for a college football game without commercials.

"We thought that would be sufficient when we booked the time last summer," Nichols said. "Of all the games we did last year, not one ran even close to 4 o'clock. That's what we were basing this year on. I'm not trying to make excuses. It was our fault for not realizing something like this could happen, and yes, we have a tremendous amount of egg on our face.

"But when the game ran long, with all the injury timeouts and passing, we had no way out. The satellite was booked to capacity and we absolutely could not go beyond 4. Since then, we have taken action to be better prepared."

EEN has arranged for an extra hour of PBS satellite time for the remaining three games on the Ivy League TV package. A lot of good that did for Penn-Princeton viewers Saturday.

Nichols denied that such an arrangement could have been made when it became apparent that Penn's 31-21 victory would not be completed before 4 p.m. But Quattrone and a network spokesman said EEN could simply have switched satellite transponder numbers to avoid the disaster.

"I don't think that was possible," Nichols said.

But be didn't know. What he did know was that, had the scoreboard read 21-21 instead of 31-21, "it might have been a different situation. We'd have tried to squeeze somewhere. We couldn't have gotten 15 minutes, but a couple minutes, maybe,"

Oh? Just like that, EEN was going to find more satellite time somewhere? But it didn't because Penn was ahead by 10 with 5:43 remaining?

That statement of disinterest alone is reason for Channel 12 and the 27 other public stations carrying the Ivy package to turn up their noses when EEN comes calling next season.

"When you're dealing with live television, especially a football game," Quattrone said, "you can't say, 'Oh. we'll be done by 4 o'clock.' Commercials or no commercials. It's live television, and there has to be contingency plans for runover. No ifs, ands or buts about it. And considering that it's a company that's been involved with the production of sports events for the networks, they certainly should've known that.

"It was an absolute embarrassment. Really rinky-dink."