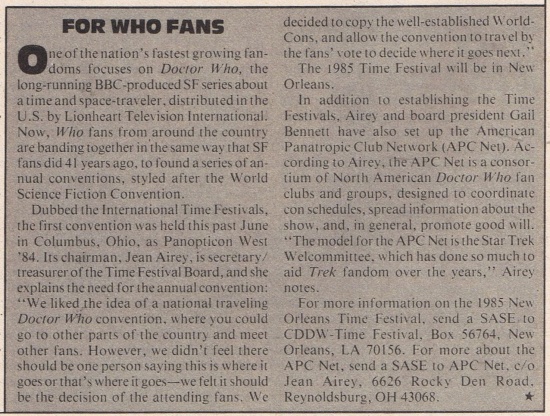 One of the nation's fastest growing fandoms focuses on Doctor Who, the long-running BBC-produced SF series about a time and space-traveler, distributed in the U.S. by Lionheart Television International. Now, Who fans from around the country are banding together in the same way that SF fans did 41 years ago, to found a series of annual conventions, styled after the World Science Fiction Convention.

Dubbed the International Time Festivals, the first convention was held this past June in Columbus, Ohio. as Panopticon West '84. Its chairman, Jean Airey, is secretary/ treasurer of the Time Festival Board, and she explains the need for the annual convention: "We liked the idea of a national traveling Doctor Who convention, where you could go to other parts of the country and meet other fans. However, we didn't feel there should be one person saying this is where it goes or that's where it goes—we felt it should be the decision of the attending fans. We decided to copy the well-established World-Cons, and allow the convention to travel by the fans' vote to decide where it goes next."

The 1985 Time Festival will be in New Orleans.

In addition to establishing the Time Festivals, Airey and board president Gail Bennett have also set up the American Panatropic Club Network (APC Net). According to Airey, the APC Net is a consortium of North American Doctor Who fan clubs and-groups, designed to coordinate con schedules, spread information about the show, and, in general, promote good will. "The model for the APC Net is the Star Trek Welcommittee, which has done so much to aid Trek fandom over the years," Airey notes.