Fox Steals Charm of Dr. Who 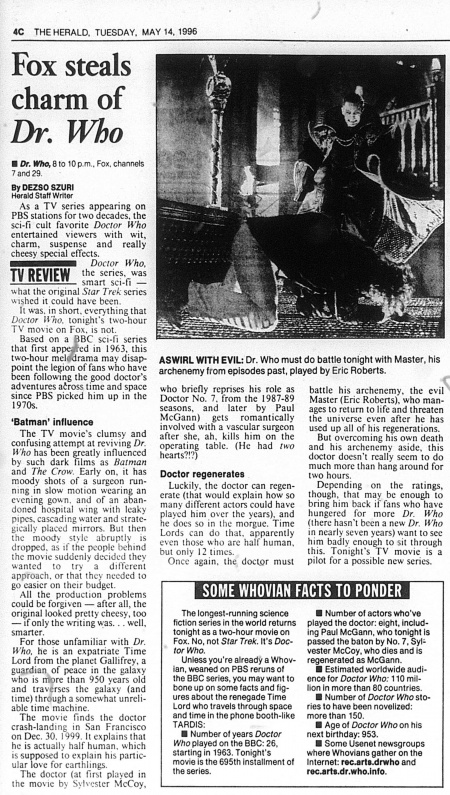 Doctor Who, the series, was smart sci-fi -- what the original Star Trek series wished it could have been.

It was, in short, everything that Doctor Who, tonight's two-hour TV movie on Fox, is not.

Based on a BBC sci-fi series that first appeared in 1963, this two-hour melodrama may disappoint the legion of fans who have been following the good doctor's adventures across time and space since PBS picked him up in the 1970s.

The TV movie's clumsy and confusing attempt at reviving Dr. Who has been greatly influenced by such dark films as Batman and The Crow. Early on, it has moody shots of a surgeon running in slow motion wearing an evening gown, and of an abandoned hospital wing with leaky pipes, cascading water and strategically placed mirrors. But then the moody style abruptly is dropped, as if the people behind the movie suddenly decided they wanted to try a different approach, or that they needed to go easier on their budget.

All the production problems could be forgiven -- after all, the original looked pretty cheesy, too -- if only the writing was... well, smarter.

For those unfamiliar with Dr. Who, he is an expatriate Time Lord from the planet Gallifrey, a guardian of peace in the galaxy who is more than 950 years old and traverses the galaxy (and time) through a somewhat unreliable time machine.

The movie finds the doctor crash-landing in San Francisco on Dec. 30, 1999. It explains that he is actually half human, which is supposed to explain his particular love for earthlings.

The doctor (at first played in the movie by Sylvester McCoy, who briefly reprises his role as Doctor No. 7, from the 1987-89 seasons, and later by Paul McGann) gets romantically involved with a vascular surgeon after she, ah, kills him on the operating table. (He had two hearts?!?)

Luckily, the doctor can regenerate (that would explain how so many different actors could have played him over the years), and he does so in the morgue. Time Lords can do that, apparently even those who are half human, but only 12 times.

Once again, the doctor must battle his archenemy, the evil Master (Eric Roberts), who manages to return to life and threaten the universe even after he has used up all of his regenerations.

But overcoming his own death and his archenemy aside, this doctor doesn't really seem to do much more than hang around for two hours.

Depending on the ratings, though, that may be enough to bring him back if fans who have hungered for more Dr. Who (there hasn't been a new Dr. Who in nearly seven years) want to see him badly enough to sit through this. Tonight's TV movie is a pilot for a possible new series.

Caption: ASWIRL WITH EVIL: Dr. Who must do battle tonight with Master, his archenemy from episodes past, played by Eric Roberts.

SOME WHOVIAN FACTS TO PONDER

The longest-running science fiction series in the world returns tonight as a two-hour movie on Fox. No, not Star Trek. It's Doctor Who.

Unless you're already a Whovian, weaned on PBS reruns of the BBC series, you may want to bone up on some facts and figures about the renegade Time Lord who travels through space and time in the phone booth-like TARDIS: