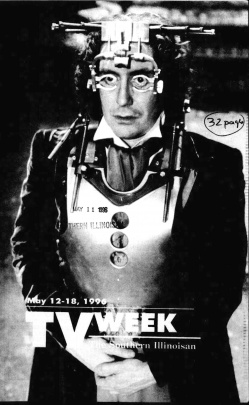 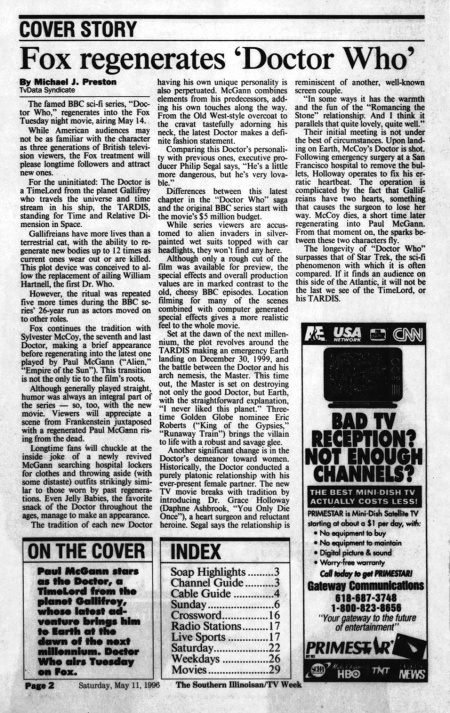 The famed BBC sci-fi series, "Doctor Who," regenerates into the Fox Tuesday night movie, airing May 14. While American audiences may not be as familiar with the character as three generations of British television viewers, the Fox treatment will please longtime followers and attract new ones.

For the uninitiated: The Doctor is a Time Lord from the planet Gallifrey who travels the universe and time stream in his ship, the TARDIS, standing for Time and Relative Dimension in Space.

Gallifreians have more lives than a terrestrial cat, with the ability to regenerate new bodies up to 12 times as current ones wear out or are killed. This plot device was conceived to allow the replacement of ailing William Hartnell, the first Dr. Who.

However, the ritual was repeated five more times during the BBC series' 26-year run as actors moved on to other roles.

Fox continues the tradition with Sylvester McCoy, the seventh and last Doctor, making a brief appearance before regenerating into the latest one played by Paul McGann ("Alien," "Empire of the Sun"). This transition is not the only tie to the film's roots.

Although generally played straight, humor was always an integral part of the series — so, too, with the new mov. Viewers will appreciate a scene from Frankenstein juxtaposed with a regenerated Paul McGann rising from the dead.

Longtime fans will chuckle at the inside joke of a newly revived McGann searching hospital lockers for clothes and throwing aside (with some distaste) outfits strikingly similar to those worn by past regenerations. Even Jelly Babies, the favorite snack of the Doctor throughout the ages, manage to make an appearance. The tradition of each new Doctor having his own unique personality is also perpetuated. McGann combines elements from his predecessors, adding his own touches along the way. From the Old West-style overcoat to the cravat tastefully adorning his neck, the latest Doctor makes a definite fashion statement.

Differences between this latest chapter in the "Doctor Who" saga and the original BBC series start with the movie's $5 million budget.

While series viewers are accustomed to alien invaders in silver-painted wet suits topped with car headlights, they won't and any here. Although only a rough cut of the film was available for preview, the special effects and overall production values are in marked contrast to the old, cheesy BBC episodes. Location filming for many of the scenes combined with computer generated special effects gives a more realistic feel to the whole movie.

Set at the dawn of the next millennium, the plot revolves around the TARDIS making an emergency Earth landing on December 30, 1999, and the battle between the Doctor and his arch nemesis, the Master. This time out, the Master is set on destroying not only the good Doctor, but Earth, with the straightforward explanation, "I never liked this planet.' Three-time Golden Globe nominee Eric Roberts ("King of the Gypsies," "Runaway Train") brings the villain to life with a robust and savage glee. Another significant change is in the Doctor's demeanor toward women. Historically, the Doctor conducted a purely platonic relationship with his ever-present female partner. The new TV movie breaks with tradition by introducing Dr. Grace Holloway (Daphne Ashbrook, "You Only Die Once"), a heart surgeon and reluctant heroine. Segal says the relationship is reminiscent of another, well-known scree couple

"In some ways it has the warmth and the fun of the "Romancing the Stone" relationship. And I think it parallels that quite lovely, quite well." Their initial meeting is not under the best of circumstances. Upon landing on Earth, McCoy's Doctor is shot. Following eminency surgery at a San Francisco hospital to remove the bullets, Holloway operates to fix his erratic heartbeat. The operation is complicated by the fact that Gallifreians have two hearts, something that muses the surgeon to lose her way. McCoy dies, a short time later regenerating into Paul McGann. From that moment on, the sparks between these two characters fly.

The longevity of "Doctor Who" surpasses that of Star Trek, the sci-fi phenomenon with which it is often compared. If it finds an audience on this side of the Atlantic, it will not be the last we see of the TimeLord, or his TARDIS.