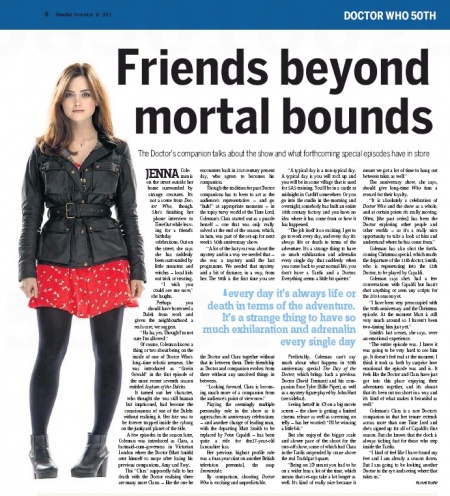 every day it's always life or death in terms of the adventure. It's a strange thing to have so much exhilaration and adrenalin every single day

JENNA Coleman is on the street outside her home surrounded by strange creatures. It's not a scene from Doctor Who, though. She's finishing her phone interview to

TimeOut while leaving for a friend's birthday celebrations. Out on the street, she says she has suddenly been surrounded by little monsters and witches — local kids out trick or treating.

"I wish you could see me now," she laughs.

Perhaps you should have borrowed a Dalek from work and given the neighbourhood a real scare, we suggest.

Of course, Coleman knows a thing or two about being on the inside of one of Doctor Who's long-time robotic nemeses. She was introduced as "Oswin Oswald" in the first episode of the most recent seventh season entitled Asylum of the Daleks.

It turned out her character, who thought she was still human but imprisoned, had become the consciousness of one of the Daleks without realising it. Her fate was to be forever trapped inside the cyborg on the junkyard planet of the title.

A few episodes in the season later, Coleman was introduced as Clara, a barmaid-cum-governess in Victorian London where the Doctor (Matt Smith) sent himself to mope after losing his previous companions, Amy and Rory.

This "Clara" supposedly falls to her death with the Doctor realising there are many more Claras — like the one he encounters back in 21st century present day, who agrees to becomes his companion.

Though the tradition for past Doctor companions has to been to act as the audience's representative — and go "huh?" at appropriate moments — in the topsy turvy world of the Time Lord, Coleman's Clara started out as a puzzle herself — one that was only really solved at the end of the season, which, in turn, was part of the set-up for next week's 50th anniversary show.

"A lot of the last year was about the mystery and in a way we needed that — she was a mystery until the last programme. We needed that mystery and a bit of distance, in a way, from her. The 50th is the first time you see

"A typical day is a non-typical day. A typical day is you will rock up and you will be in some village that is used for SAS training. You'll be in a castle at midnight in Cardiff somewhere. Or you go into the studio in the morning and overnight, somebody has built an entire 18th century factory and you have no idea where it has come from or how it has happened.

"The job itself it so exciting. I get to go to work every day, and every day it's always life or death in terms of the adventure. It's a strange thing to have so much exhilaration and adrenalin every single day that suddenly when you come back to your normal life, you don't have a Tardis and a Doctor. Everything seems a little bit quieter." the Doctor and Clara together without that in between them. Their friendship as Doctor and companion evolves from there without any unsolved things in between.

"Looking forward, Clara is becoming much more of a companion from the audience's point of view now."

Playing the seemingly multiple personality role in the show as it approaches its anniversary celebrations — and another change of leading man, with the departing Matt Smith to be replaced by Peter Capaldi — has been quite a ride for the27-year-old Lancashire lass.

Her previous highest profile role was a four-year stint on another British television perennial, the soap

Who is exciting and unpredictable.

Predictably, Coleman can't say much about what happens in 50th anniversary special The Day of the

Doctor, which brings back a previous Doctor (David Tennant) and his companion Rose Tyler (Billie Piper), as well as a mystery figure played by John Hurt (see sidebar).

Seeing herself in 3D on a big movie screen — the show is getting a limited cinema release as well as screening on telly — has her worried: "I'll be wincing a little bit."

But she enjoyed the bigger scale and slower pace of the shoot for the one-off show, some of which had Clara in the Tardis suspended by crane above the real Trafalgar Square.

"Being on 3D meant you had to be on a wider lens a lot of the time, which means that set-ups take a lot longer as well. It's kind of really nice because it meant we got a lot of time to hang out between takes as well."

The anniversary show, she says, should give long-time Who fans a reward for their loyalty. "It is absolutely a celebration of

Doctor Who and the show as a whole, and at certain points it's really moving. Often, [the past series] has been the Doctor exploring other people and other worlds — so it's a really nice opportunity to take a look at him and understand where he has come from."

Coleman has also shot the forthcoming Christmas special, which marks the departure of the 11th doctor, Smith, who is regenerating into the 12th Doctor, to be played by Capaldi.

Coleman says she's had a few conversations with Capaldi but hasn't shot anything or seen any scripts for the 2014 season yet.

"I have been very preoccupied with the 50th anniversary and the Christmas episode. At the moment Matt is still very much around so I haven't been two-timing him just yet."

Smith's last scenes, she says, were an emotional experience.

"The entire episode was. I knew it was going to be very hard to see him go. It doesn't feel real at the moment. I think it took us both by surprise how emotional the episode was and is. It feels like the Doctor and Clara have just got into this place enjoying their adventures together, and it's almost that it's been cut too short in a way and it's kind of what makes it beautiful as well."

Coleman's Clara is a rare Doctor's companion in that her tenure extends across more than one Time Lord and she's signed up for all of Capaldi's first season. But she knows that the clock is always ticking fast for those who step inside the Tardis.

"I kind of feel like I have found my feet and I am already a season down. But I am going to be looking another Doctor in the eye and seeing where that takes us."