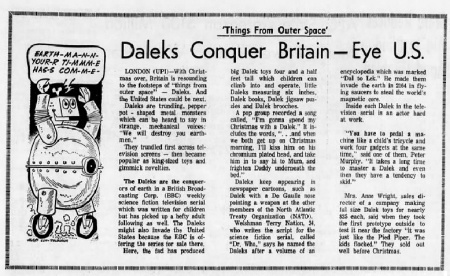 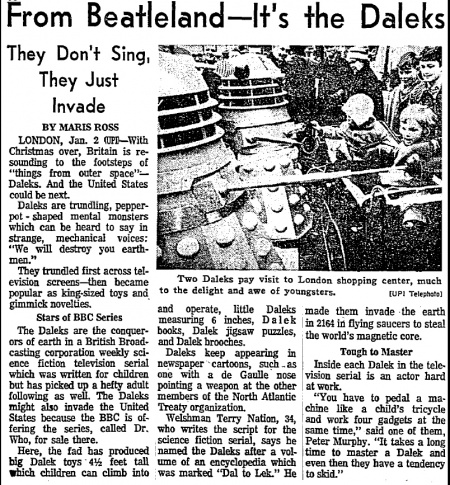 LONDON, Jan. 2 (UPI)—With Christmas over, Britain is resounding to the footsteps of "things from outer space"— Daleks. And the United States could be next.

Daleks are trundling, pepperpot-shaped mental monsters which can be heard to say in strange, mechanical voices: "We will destroy you earthmen."

Stars of BBC Series The Daleks are the conquerors of earth in a British Broadcasting corporation weekly science fiction television serial which was written for children but has picked up a hefty adult following as well. The Daleks might also invade the United States because the BBC is offering the series, called Dr. Who, for sale there.

Daleks keep appearing in newspaper cartoons, such as one with a de Gaulle nose pointing a weapon at the other members of the North Atlantic Treaty organization.

Welshman Terry Nation, 34, who writes the script for the science fiction serial, says he named the Daleks after a volume of an encyclopedia which was marked "Dal to Lek." He made them invade the earth in 2164 in flying saucers to steal the world's magnetic core.

Inside each Dalek in the television serial is an actor hard at work. "You have to pedal a machine like a child's tricycle and work four gadgets at the same time," said one of them, Peter Murphy. "It takes a long time to master a Dalek and even then they have a tendency to skid."

Caption: Two Daleks pay visit to London shopping center, much to the delight and awe of youngsters. [UPI Telephoto]