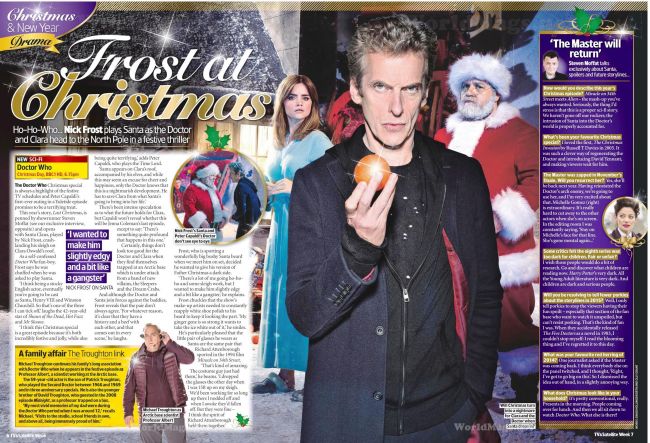 Ho-Ho-Who... Nick Frost plays Santa as the Doctor and Clara head to the North Pole in a festive thriller

The Doctor Who Christmas special is always a highlight of the festive TV schedules and Peter Capaldi's first-ever outing in a Yuletide episode promises to be a terrifying treat.

This year's story, Last Christmas, is penned by showrunner Steven Moffat (see our exclusive interview, opposite) and opens with Santa Claus, played by Nick Frost, crash-landing his sleigh on Clara Oswald's roof.

As a self-confessed Doctor Who fan-boy, Frost says he was chuffed when he was asked to play Santa.

'I think being a stocky English actor, eventually you're going to be cast as Santa, Henry VIII and Winston Churchill. So that's one of the three I can tick off,' laughs the 42-year-old star of Shaun of the Dead, Hot Fuzz and Mr Sloane.

'I think this Christmas special is a great episode because it's both incredibly festive and jolly, while also being quite terrifying,' adds Peter Capaldi, who plays the Time Lord.

'Santa appears on Clara's roof, accompanied by his elves, and while this may seem an excuse for cheer and happiness, only the Doctor knows that this is a nightmarish development. He has to save Clara from what Santa's going to bring into her life.'

There's been intense speculation as to what the future holds for Clara, but Capaldi won't reveal whether this will be Jenna Coleman's last episode, except to say: 'There's something quite profound that happens in this one.'

Certainly, things don't look too good for the Doctor and Clara when they find themselves trapped at an Arctic base which is under attack from a band of new villains, the Sleepers and the Dream Crabs.

And although the Doctor and Santa join forces against the baddies, Frost reveals that the pair don't always agree. 'For whatever reason, it's clear that they have a history and a beef with each other, and that comes out in every scene,' he laughs.

Frost, who is sporting a wonderfully big bushy Santa beard when we meet him on set, decided he wanted to give his version of Father Christmas a dark side.

'There's a lot of me going ho-ho-ho and some sleigh work, but I wanted to make him slightly edgy and a bit like a gangster,' he explains.

Frost chuckles that the show's make-up artists needed to constantly reapply white shoe polish to his beard to keep it looking the part. 'My ginger gene is so strong it wants to take the ice white out of it,' he smiles.

He's particularly pleased that the little pair of glasses he wears as Santa are the same pair that Richard Attenborough sported in the 1994 film Miracle on 34th Street.

'That's kind of amazing. The costume guy just had them,' he beams. 'I dropped the glasses the other day when I was 15ft up on my sleigh. We'd been working for so long up there I nodded off and when I awoke they'd fallen off. But they were fine — I think the spirit of Richard Attenborough held them together.'

A family affair The Troughton link

Michael Troughton continues his family's long association with Doctor Who when he appears in the festive episode as Professor Albert, a scientist working at the Arctic base.

The 59-year-old actor is the son of Patrick Troughton, who played the Second Doctor between 1966 and 1969 and in three anniversary specials. He is also the younger brother of David Troughton, who guested in the 2008 episode Midnight, as a professor trapped on a bus.

'My most vivid memories of my dad were during the Doctor Who period when I was around 12,' recalls Michael. 'Visits to the studio, school friends in awe, and above all, being immensely proud of him.'

The Master will return

How would you describe this year's Christmas episode?

Miracle on 34th Street meets Alien - the mash-up you've always wanted. Seriously, the thing I'd stress is that this is a proper sci-fi story. We haven't gone off our rockers; the intrusion of Santa into the Doctor's world is properly accounted for.

What's been your favourite Christmas special?

I loved the first, The Christmas Invasion by Russell T Davies in 2005. It was such a clever way of regenerating the Doctor and introducing David Tennant, and making viewers wait for him.

The Master was zapped in November's finale. Will you resurrect her?

Yes, she'll be back next year. Having reinstated the Doctor's arch enemy, we're going to use her, and I'm very excited about that. Michelle Gomez (right) is extraordinary. It's really hard to cut away to the other actors when she's on screen. In the editing room I was constantly saying, 'Stay on Michelle's face for that line. She's gone mental again...'

Some critics felt the eighth series was too dark for children. Fair or unfair?

Will you be resolving to tell fewer porkies about the storylines in 2015?

Well, I only tell porkies to stop the viewers having their fun spoilt — especially that section of the fan base who want to watch it unspoiled, but can't resist peeking. That's the kind of fan I was. When they accidentally released The Five Doctors as a novel in 1983, I couldn't stop myself: I read the blooming thing and I've regretted it to this day.

What was your favourite red herring of 2014?

One journalist asked if the Master was coming back. I think everybody else on the panel twitched, and I thought, 'Right, I've got to go big on this. So I dismissed the idea out of hand, in a slightly annoying way.

It's pretty conventional, really. Presents in the morning. People coming over for lunch. And then we all sit down to watch Doctor Who. What else is there?

Caption: Will Christmas turn into a nightmare for Clara and the Doctor when Santa drops in?