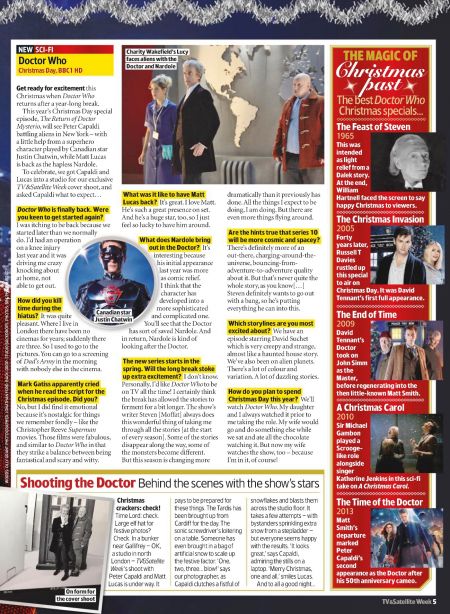 This year's Christmas Day special episode, The Return of Doctor Mysterio, will see Peter Capaldi battling aliens in New York—with a little help from a superhero character played by Canadian star Justin Chatwin, while Matt Lucas is back as the hapless Nardole.

To celebrate, we got Capaldi and Lucas into a studio for our exclusive TV&Satellite Week cover shoot, and asked Capaldi what to expect...

Doctor Who is finally back. Were you keen to get started again?

I was itching to be back because we started later than we normally do. I'd had an operation on a knee injury last year and it was driving me crazy knocking about at home, not able to get out.

How did you kill time during the hiatus?

It was quite pictures. You can go to a screening of Dad's Army in the morning with nobody else in the cinema.

Mark Gatiss apparently cried when he read the script for the Christmas episode. Did you?

No, but I did find it emotional because it's nostalgic for things we remember fondly—like the Christopher Reeve Superman movies. Those films were fabulous, and similar to Doctor Who in that they strike a balance between being fantastical and scary and witty.

What was it like to have Matt Lucas back?

It's great. I love Matt. He's such a great presence on set. And he's a huge star, too, so I just feel so lucky to have him around.

What does Nardole bring out in the Doctor?

It's interesting because his initial appearance last year was more as comic relief. I think that the character has developed into a more sophisticated and complicated one. You'll see that the Doctor has sort of saved Nardole. And in return, Nardole is kind of looking after the Doctor.

The new series starts in the spring. Will the long break stoke up extra excitement?

I don't know. Personally, I'd like Doctor Who to be on TV all the time! I certainly think the break has allowed the stories to ferment for a bit longer. The show's writer Steven [Moffat] always does this wonderful thing of taking me through all the stories [at the start of every season]. Some of the stories disappear along the way, some of the monsters become different. But this season is changing more dramatically than it previously has done. All the things I expect to be doing, I am doing. But there are even more things flying around.

Are the hints true that series 10 will be more cosmic and spacey?

There's definitely more of an out-there, charging-around-the-universe, bouncing-from-adventure-to-adventure quality about it. But that's never quite the whole story, as you know[...] Steven definitely wants to go out with a bang, so he's putting everything he can into this.

Which storylines are you most excited about?

We have an episode starring David Suchet which is very creepy and strange, almost like a haunted house story. We've also been on alien planets. There's a lot of colour and variation. A lot of dazzling stories.

How do you plan to spend Christmas Day this year?

We'll watch Doctor Who. My daughter and I always watched it prior to me taking the role. My wife would go and do something else while we sat and ate all the chocolate watching it. But now my wife watches the show, too — because I'm in it, of course!

THE MAGIC OF Christmas past

The best Doctor Who Christmas specials...

This was intended as light relief from a Dalek story. At the end, William Hartnell faced the screen to say happy Christmas to viewers.

David Tennant's Doctor took on John Simm as the Master, before regenerating into the then little-known Matt Smith.

Sir Michael Gambon played a Scrooge-like role alongside singer Katherine Jenkins in this sci-fi take on A Christmas Carol.

Behind the scenes with the show's stars

Christmas crackers: check! Time Lord: check. Large elf hat for festive photos? Check. In a bunker near Gallifrey - OK, a studio in north London - TV5Satellite Week's shoot with Peter Capaldi and Matt Lucas is underway. It pays to be prepared for these things. The Tardis has been brought up from Cardiff for the day. The sonic screwdrivers loitering on a table. Someone has even brought in a bag of artificial snow to scale up the festive factor. 'One, two, three... blow!' says our photographer, as Capaldi clutches a fistful of snowflakes and blasts them across the studio floor. It takes a few attempts - with bystanders sprinkling extra snow from a stepladder but everyone seems happy with the results. 'It looks great; says Capaldi, admiring the stills on a laptop. 'Merry Christmas, one and all; smiles Lucas.