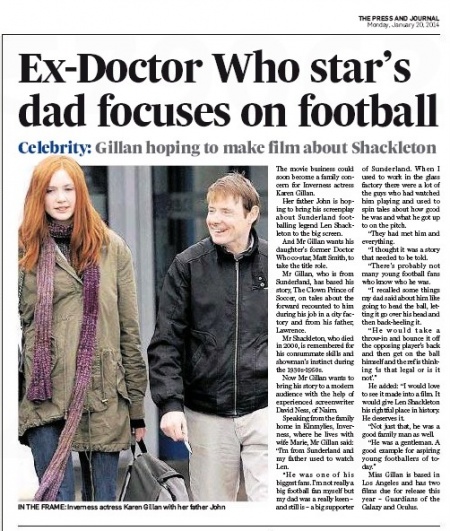 IN THE FRAME: Inverness actress Karen Gillan with her father John

Her father John is hoping to bring his screenplay about Sunderland footballing legend Len Shackleton to the big screen.

Mr Gillan, who is from Sunderland, has based his story, The Clown Prince of Soccer, on tales about the forward recounted to him during his job in a city factory and from his father, Lawrence.

Mr Shackleton, who died in 2000, is remembered for his consummate skills and showman's instinct during the 1930s-1950s.

Now Mr Gillan wants to bring his story to a modern audience with the help of experienced screenwriter David Ness, of Nairn.

Speaking from the family home in Kinmylies, Inverness, where he lives with wife Marie, Mr Gillan said: "I'm from Sunderland and my father used to watch Len.

"He was one of his biggest fans. I'm not really a big football fan myself but my dad was a really keen – and still is – a big supporter of Sunderland. When I used to work in the glass factory there were a lot of the guys who had watched him playing and used to spin tales about how good he was and what he got up to on the pitch.

"They had met him and everything.

"I thought it was a story that needed to be told.

"There's probably not many young football fans who know who he was.

"I recalled some things my dad said about him like going to head the ball, letting it go over his head and then back-heeling it.

"He would take a throw-in and bounce it off the opposing player's back and then get on the ball himself and the ref is thinking 'is that legal or is it not'."

He added: "I would love to see it made into a film. It would give Len Shackleton his rightful place in history. He deserves it.

"Not just that, he was a good family man as well.

"He was a gentleman. A good example for aspiring young footballers of today."

Miss Gillan is based in Los Angeles and has two films due for release this year – Guardians of the Galaxy and Oculus.