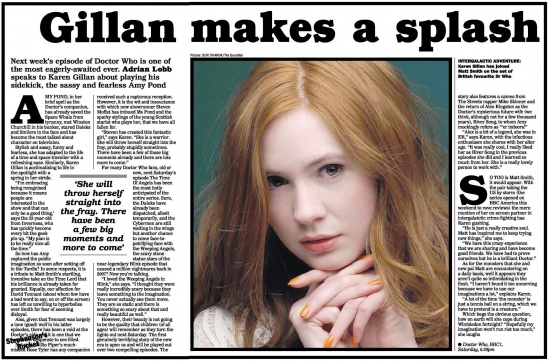 Next week's episode of Doctor Who is one of the most eagerly-awaited ever. Adrian Lobb speaks to Karen Gillan about playing his sidekick, the sassy and fearless Amy Pond

AMY POND, in her brief spell as the Doctor's companion, has already saved the Space Whale from tyranny, met Winston Churchill in his bunker, stared Daleks and Smilers in the face and has become the most talked about character on television.

Stylish and sassy, funny and fearless, she has adapted to the life of a time and space traveller with a refreshing ease. Similarly, Karen Gillan is acclimatising to life in the spotlight with a spring in her stride.

"I'm embracing being recognised because it means people are interested in the show and that can only be a good thing,' says the 22-year-old from Inverness, who has quickly become every bit the geek pin-up. "My plan is to be really nice all the time."

So how has Amy captured the public imagination so soon after setting off in the Tardis? In some respects, it is a tribute to Matt Smith's startling, inventive take on the Time Lord that his brilliance is already taken for granted. Equally, our affection for David Tennant (about whom few have a bad word to say, on or off the screen) has left us unwilling to hyperbolise over Smith for fear of seeming disloyal.

Also, given that Tennant was largely a lone (good) wolf in his latter episodes, there has been a void at the Doctor's side and it is one that we desperate to see filled.

Not since Billie Piper's much-missed Rose Tyler has any companion received such a rapturous reception. However, it is the wit and insouciance with which new showrunner Steven Moffat has imbued Ms Pond and the sparky stylings of the young Scottish starlet who plays her, that we have all fallen for.

"Steven has created this fantastic girl," says Karen. "She is a warrior. She will throw herself straight into the fray, probably stupidly sometimes. There have been a few of those big moments already and there are lots more to come."

For many Doctor Who fans, old or new, next Saturday's episode The Time Of Angels has been the most hotly anticipated of the entire series. Sure, the Daleks have already been dispatched, albeit temporarily, and the Cybermen are still waiting in the wings but another chance to come face-to-petrifying-face with the Weeping Angels, the scary stone statue stars of the near-legendary Blink episode that caused a million nightmares back in 2007? Now you're talking.

"I loved the Weeping Angels in Blink," she says. "I thought they were really incredibly scary because they leave something to the imagination. You never actually see them move. They are so static and there is something so scary about that and really beautiful as well."

However, their beauty is not going to be the quality that children (of all ages) will remember as they turn the lights out next Saturday. The first genuinely terrifying story of the new era is upon us and will be played out over two compelling episodes. The

story also features a cameo from The Streets rapper Mike Skinner and the return of Alex Kingston as the Doctor's mysterious future wife (we think, although not for a few thousand years), River Song, to whom Amy mockingly refers as "'er indoors!"

"Alex is a bit of a legend, she was in ER," says Karen, with the infectious enthusiasm she shares with her alter ego. "It was really cool, I really liked her as River Song in the previous episodes she did and I learned so much from her. She is a really lovely person to work with."

SO TOO is Matt Smith, it would appear. With the pair taking the US by storm (the series opened on BBC America this weekend to rave reviews) the mere mention of her on-screen partner in intergalatctic crime-fighting has Karen gushing.

"He is just a really creative soul. Matt has inspired me to keep trying new things," she says.

"We have this crazy experience that we are sharing and have become good friends. We have had to prove ourselves but he is a brilliant Doctor."

As for the monsters that she and new pal Matt are encountering on a daily basis, well it appears they aren't quite so intimidating in the flesh. "I haven't found it too unnerving because we have to use our imaginations a lot," explains Karen.

"A lot of the time the monster' is just a tennis ball on a string, which we have to pretend is a creature."

Which begs the obvious question, how on earth will she cope during Wimbledon fortnight? "Hopefully my imagination won't run riot too much," she laughs