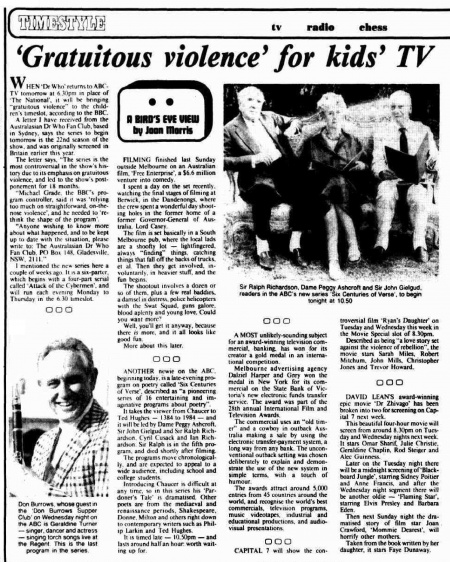 WHEN 'Dr Who' returns to ABC TV tomorrow at 6.30pm in place of 'The National', it will be bringing "gratuitous violence" to the children's timeslot, according to the BBC.

A letter I have received from the Australasian Dr Who Fan Club, based in Sydney, says the series to begin tomorrow is the 22nd season of the show, and was originally screened in Britain earlier this year.

The letter says, "The series is the most controversial in the show's his tory due to its emphasis on gratuitous violence, and led to the show's postponement for 18 months.

"Michael Grade, the BBC's program controller, said it was 'relying too much on straightforward, on-the nose violence', and he needed to 're think the shape of the program'.

"Anyone wishing to know more about what happened, and to be kept up to date with the situation, please write to: The Australasian Dr Who Fan Club, PO Box 148, Gladesville, NSW, 2111."

I mentioned the new series here a couple of weeks ago. It is a six-parter, which begins with a four-part serial called 'Attack of the Cybermen', and will run each evening Monday to Thursday in the 6.30 timeslot.