Guess Who's Here! Doctor Who Comes to WKAR-TV 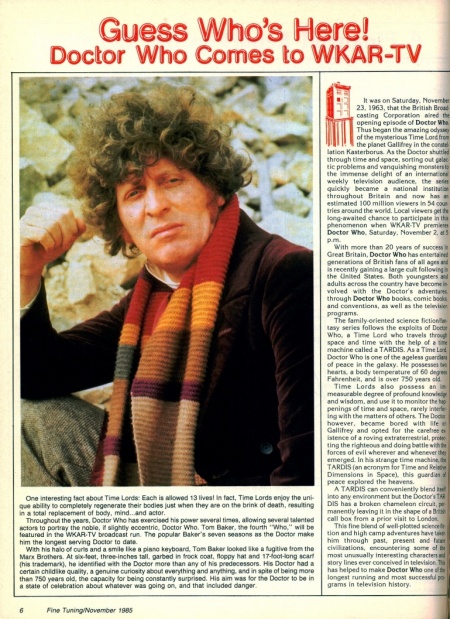 It was on Saturday, November 23, 1963, that the British Broadcasting Corporation aired the opening episode of Doctor Who. Thus began the amazing odyssey of the mysterious Time Lord from the planet Gallifrey in the constellation Kasterborus. As the Doctor shuttled through time and space, sorting out galactic problems and vanquishing monsters to the immense delight of an international weekly television audience, the series quickly became a national institution throughout Britain and now has an estimated 100 million viewers in 54 countries around the world. Local viewers get the long-awaited chance to participate in this phenomenon when WKAR-TV premieres Doctor Who, Saturday, November 2, at 5 p.m.

With more than 20 years of success in Great Britain, Doctor Who has entertained generations of British fans of all ages and is recently gaining a large cult following in the United States. Both youngsters and adults across the country have become involved with the Doctor's adventures, through Doctor Who books, comic books, and conventions, as well as the television programs.

The family-oriented science fiction/fantasy series follows the exploits of Doctor Who, a Time Lord who travels through space and time with the help of a time machine called a TARDIS. As a Time Lord. Doctor Who is one of the ageless guardians of peace in the galaxy. He possesses two hearts, a body temperature of 60 degrees Fahrenheit, and is over 750 years old.

Time Lords also possess an immeasurable degree of profound knowledge and wisdom, and use it to monitor the happenings of time and space, rarely interfering with the matters of others. The Doctor, however, became bored with life on Gallifrey and opted for the carefree existence of a roving extraterrestrial, protecting the righteous and doing battle with the forces of evil wherever and whenever they emerged. In his strange time machine, the TARDIS (an acronym for Time and Relative Dimensions in Space), this guardian of peace explored the heavens.

A TARDIS can conveniently blend itself into any environment but the Doctor's TARDIS has a broken chameleon circuit, permanently leaving it in the shape of a British call box from a prior visit to London.

This fine blend of well-plotted science fiction and high camp adventures have taken him through past, present and future civilizations, encountering some of the most unusually interesting characters and story lines ever conceived in television. This has helped to make Doctor Who one of the longest running and most successful pro. grams in television history.

One interesting fact about Time Lords: Each is allowed 13 lives! In fact, Time Lords enjoy the unique ability to completely regenerate their bodies just when they are on the brink of death, resulting in a total replacement of body, mind...and actor.

Throughout the years, Doctor Who has exercised his power several times, allowing several talented actors to portray the noble, if slightly eccentric, Doctor Who. Tom Baker, the fourth "Who," will be featured in the WKAR-TV broadcast run. The popular Baker's seven seasons as the Doctor make him the longest serving Doctor to date.

With his halo of curls and a smile like a piano keyboard, Tom Baker looked like a fugitive from the Marx Brothers. At six-feet, three-inches tall, garbed in frock coat, floppy hat and 17-foot-long scarf (his trademark). he identified with the Doctor more than any of his predecessors. His Doctor had a certain childlike quality, a genuine curiosity about everything and anything, and in spite of being more than 750 years old, the capacity for being constantly surprised. His aim was for the Doctor to be in a state of celebration about whatever was going on, and that included danger.