Happy to be you know who 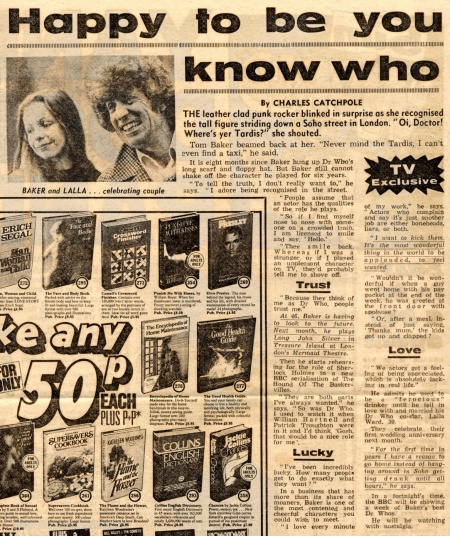 THE leather clad punk rocker blinked in surprise as she recognised the tall figure striding down a Soho street in London. "Oi, Doctor! Where's yer Tardis?" she shouted.

Tom Baker beamed back at her. "Never mind the Tardis, I can't even find a taxi," he said.

It is eight months since Baker hung up Dr Who's long scarf and floppy hat. But Baker still cannot shake off. the character he played for six years. "To tell the truth, I don't really want to," he says. "I adore being recognised in the street. " People assume that an actor has the qualities of the role he plays.

"So if I find myself nose to nose with someone on •a crowded train, I am licensed to smile and say. 'Hello.'

"The smile back. Whereas if I was a stranger or if I played an unpleasant character on TV, they'd probably tell me to shove off.

"Because they think of me as Dr Who, people trust me."

At 46, Baker is having to look to the future. Next month, he plays Long John Silver in Treasure Island at London's Mermaid Theatre.

Then he starts rehearsing for the role of Sherlock Holmes in a new BBC serialisation of The Hound Of The Baskervilles.

"They are both parts I've always wanted," he says. " So was Dr Who. I used to watch it when William Hartnell and Patrick Troughton were in it and I'd think. 'Gosh, that would be a nice role for me'.

"I've been incredibly lucky. How many people get to do exactly what they want?"

In a business that has more than its share of moaners, Baker is one of the most contented and cheerful characters you could wish to meet.

"I love every minute of my work," he says. "Actors who complain and say it's just another job are either boneheads, liars, or both.

"I want to kick them. It's like most wonderful thing in the world to be applauded, to feel wanted.

"Wouldn't it be wonderful if when a guy went home with his pay packet at the end of the week, he was greeted at the front door with applause ?

"Or, after a meal, instead of just saying, 'Thanks. mum,' the kids got up and clapped ?

"We actors get a feeling of being appreciated, which is absolutely lacking in real life."

He admits he used to be a "ferocious" drinker until he fell in love with and married his Dr Who co-star, Lalla Ward, 30.

They celebrate their first wedding anniversary next month.

"For the first time in years I have a reason to go home instead of hanging around in Soho getting drunk until all hours," he says.

In a fortnight's time, the BBC will be showing a week of Baker's best Dr. Whos.

He will be watching with nostalgia.