Have a lot of affairs, then get married 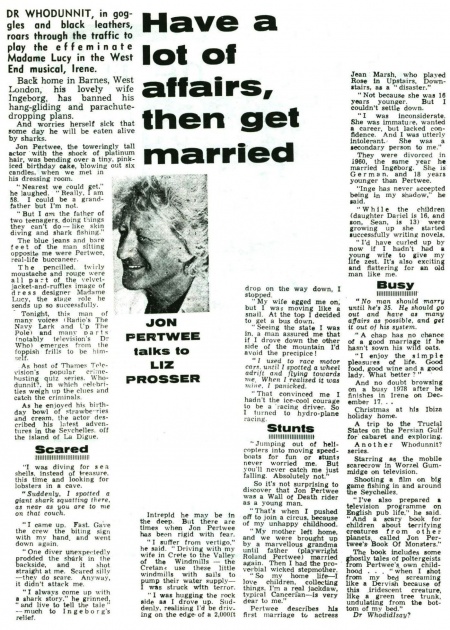 DR WHODUNNIT, in goggles and black leathers, roars through the traffic to play the effeminate Madame Lucy in the West End musical, Irene.

Back home in Barnes, West London, his lovely wife Ingeborg, has banned his hang-gliding and parachute-dropping plans.

And worries herself sick that some day he will be eaten alive by sharks.

Jon Pertwee, the toweringly tall actor with the shock of platinum hair, was bending over a tiny, pink-iced birthday cake, blowing out six candles, when we met in his dressing room.

"But I am the father of two teenagers, doing things they can't do — like skin diving and shark fishing."

The blue jeans and bare feet of the man sitting opposite me were Pertwee, real-life buccaneer.

The penciled, twirly moustache and rouge were all part of the velvet-jacket-and-ruffles image of dress designer Madame Lucy, the stage role he sends up so successfully.

Tonight, this man of many voices (Radio's The Navy Lark and Up The Pole) and many Darts (notably television's Dr Who) emerges from the foppish frills to be himself.

As host of Thames Television's popular crime-busting quiz series. Whodunnit?, in which celebrities weigh up the clues and catch the criminals.

As he enjoyed his birthday bowl of strawberries and cream. the actor described his latest adventures in the Seychelles. off the island of La Digue.

"I was diving for sea shells instead of treasure. this time and looking for lobsters in a cave.

"Suddenly. I spotted a giant shark squatting there, as near as you are to me on that couch.

"I came up. Fast. Gave the crew the biting sign with my hand, and went down again.

"One diver unexpectedly prodded the shark in the backside, and it shot straight at me. Scared silly —they do scare. Anyway, it didn't attack me.

"I always come up with a shark story," he grinned, " and live to tell the tale" --much to Ingeborg's relief.

Intrepid he may be in the deep. But there are times when Jon Pertwee has been rigid with fear.

"1 suffer from vertigo." he said. "Driving with my wife in Crete to the Valley of the Windmills — the Cretan; use these little windmills with sails to pump their water supply—I was struck with terror.

"I was hugging the rock side as I drove up. Suddenly, realising I'd be driving on the edge of a 2,000ft drop on the way down, I stopped.

"My wife egged me on; but I was moving like a snail. At the top I decided to get a bus down.

"Seeing the state I was in, a man assured me that if I drove down the other side of the mountain I'd avoid the precipice!

"1 used to race motor cars. until I spotted a wheel adrift and flying towards nee, When I realised it was mine, I panicked.

"That convinced me I hadn't the ice-cool courage to be a 'racing driver. So I turned to hydro-plane racing.

"Jumping out of helicopters into moving speedboats for fun or stunts never worried me. But you'll never catch me just falling. Absolutely not." So it's not surprising to discover that Jon Pertwee was a Wall of Death rider as a young man.

"That's when I pushed off to join a circus, because of my unhappy childhood.

"My mother left home, and we were brought up by a marvellous grandma until father (playwright Roland Pertwee) married again. Then I had the proverbial wicked stepmother.

Pertwee describes his first marriage to actress Jean Marsh, who played Rose in Upstairs, Downstairs, as a "disaster."

"Not because she was 16 years younger. But I couldn't settle down.

"I was inconsiderate. She was immature, wanted a career, but lacked confidence. And I was utterly intolerant., She was a secondary person to me."

They were divorced in 1960, the same year he married Ingeborg. She is German, and 18 years younger than Pertwee. "Inge has never accepted being in my shadow," he said.

"While the children (daughter Dariel is 16, and son, Sean, is 13) were growing up she started successfully writing novels. "I'd have curled up by now if I hadn't had a young wife to give my life zest. It's also exciting and flattering for an old man like me.

"No man should marry until he's 35. He should go out and have as many affairs as possible, and get it out of his system.

"A chap has no chance of a good marriage if he hasn't sown his wild oats.

"I enjoy the simple pleasures of life. Good food, good wine and a good lady. What better ?"

Christmas at his Ibiza holiday home.

A trip to the Trucial States on the Persian Gulf for' cabaret and exploring.

Starring as the mobile scarecrow in Worzel Gummidge on television.

Shooting a film on big game fishing in and around the Seychelles.

"I've also prepared a television programme on English pub life." he said. "And a scary book for children about terrifying creatures from other planets, called Jon Pertwee's Book Of Monsters."

The book includes some ghostly tales of poltergeists from Pertwee's own childhood ... " when I shot from my bed screaming like a Dervish because of this iridescent creature, like a green tree trunk, undulating from the bottom of my bed."