Having The Time Of His Lives 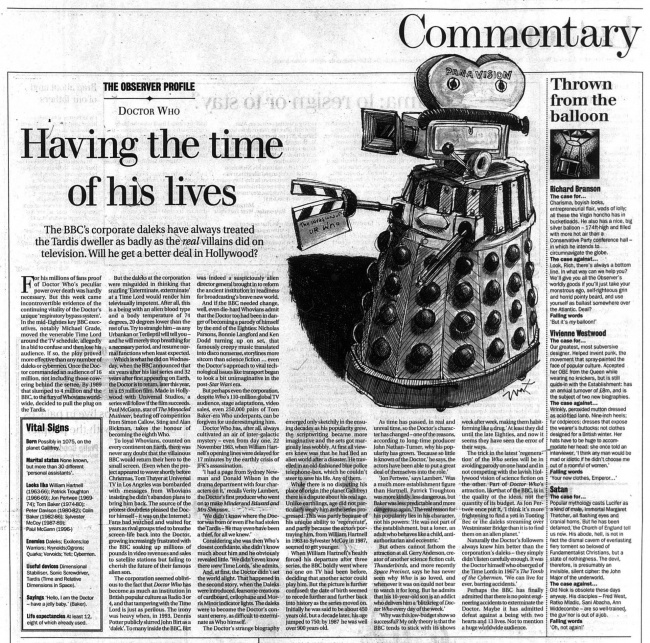 The BBC's corporate daleks have always treated the Tardis dweller as badly as the real villains did on television. Will he get a better deal in Hollywood?

For his millions of fans proof of Doctor Who's peculiar power over death was hardly necessary. But this week came incontrovertible evidence of the continuing vitality of the Doctor's unique 'respiratory bypass system'. In the mid-Eighties key BBC executives, notably Michael Grade, moved the venerable Time Lord around the TV schedule, allegedly in a bid to confuse and then lose his audience. If so, the ploy proved more effective than any number of daleks or cybermen. Once the Doctor commanded an audience of 16 million, not including those cowering behind the settee. By 1989 that slumped to 4 million and the BBC, to the fury of Whovians worldwide, decided to pull the plug on the Tardis.

But the daleks at the corporation were misguided in thinking that snarling 'Exterminate, exterminate' at a Time Lord would render him televisually impotent. After all, this is a being with an alien blood type and a body temperature of 74 degrees, 20 degrees lower than the rest of us. Try to strangle him " as any Urbankan or Terileptil will tell you " and he will merely stop breathing for a necessary period, and resume normal functions when least expected.

Which is what he did on Wednesday, when the BBC announced that six years after his last series and 32 years after first appearing on Earth, the Doctor is to return, later this year, in a £5 million film. Made in Hollywood with Universal Studios, a series will follow if the film succeeds. Paul McGann, star of The Monocled Mutineer, beating off competition from Simon Callow, Sting and Alan Rickman, takes the honour of becoming the eighth Who.

To loyal Whovians, counted on every continent on Earth, there was never any doubt that the villainous BBC would return their hero to the small screen. (Even when the project appeared to waver shortly before Christmas, Tom Thayer at Universal TV in Los Angeles was bombarded with messages from Whovians insisting he didn't abandon plans to bring him back. The source of the protest doubtless pleased the Doctor himself " it was on the Internet.) Fans had watched and waited for years as rival groups tried to breathe screen-life back into the Doctor, growing increasingly frustrated with the BBC soaking up millions of pounds in video revenues and sales to satellite stations but failing to cherish the future of their famous alien son.

The corporation seemed oblivious to the fact that Doctor Who has become as much an institution in British popular culture as Radio 3 or 4, and that tampering with the Time Lord is just as perilous. The irony was heavy when, in 1993, Dennis Potter publicly slurred John Birt as a 'dalek'. To many inside the BBC, Birt was indeed a suspiciously alien director general brought in to reform the ancient institution in readiness for broadcasting's brave new world.

And if the BBC needed change, well, even die-hard Whovians admit that the Doctor too had been in danger of becoming a parody of himself by the end of the Eighties: Nicholas Parsons, Bonnie Langford and Ken Dodd turning up on set, that famously creepy music translated into disco nonsense, storylines more sitcom than science fiction ... even the Doctor's approach to vital technological issues like transport began to look a bit unimaginative in the post-Star Wars era.

But perhaps even the corporation, despite Who's 110-million global TV audience, stage adaptations, video sales, even 250,000 pairs of Tom Baker-era Who underpants, can be forgiven for underestimating him.

Doctor Who has, after all, always cultivated an air of inter-galactic mystery " even from day one, 22 November 1963, when William Hartnell's opening lines were delayed for 17 minutes by the earthly crisis of JFK's assassination.

'I had a page from Sydney Newman and Donald Wilson in the drama department with four characters on it,' recalls Verity Lambert, the Doctor's first producer who went on to make Minder and Edward and Mrs Simpson.

'We didn't know where the Doctor was from or even if he had stolen the Tardis " he may even have been a thief, for all we knew.' Considering she was then Who's closest confidante, she didn't know much about him and he obviously revealed little. 'We didn't even know there were Time Lords,' she admits.

And, at first, the Doctor didn't set the world alight. That happened in the second story, when the Daleks were introduced, fearsome creations of cardboard, cellophane and Morris Minor indicator lights. The daleks were to become the Doctor's constant enemy, as difficult to exterminate as Who himself.

The Doctor's strange biography emerged only sketchily in the ensuing decades as his popularity grew, the scriptwriting became more imaginative and the sets got marginally less wobbly. At first all viewers knew was that he had fled an alien world after a disaster. He travelled in an old-fashioned blue police telephone-box, which he couldn't steer to save his life. Any of them.

While there is no disputing his place of origin (the planet Gallifrey) there is a dispute about his real age. Unlike earthlings, age did not particularly weary him as the series progressed. This was partly because of his unique ability to 'regenerate', and partly because the actors portraying him, from William Hartnell in 1963 to Sylvester McCoy in 1987, seemed to get younger.

When William Hartnell's health forced his departure after three series, the BBC boldly went where no one on TV had been before, deciding that another actor could play him. But the picture is further confused: the date of birth seemed to recede further and further back into history as the series moved on. Initially he was said to be about 450 years old, but a decade later, his age jumped to 750; by 1987 he was well over 900 years old.

As time has passed, in real and unreal time, so the Doctor's character has changed " one of the reasons, according to long-time producer John Nathan-Turner, why his popularity has grown. 'Because so little is known of the Doctor,' he says, the actors have been able to put a great deal of themselves into the role.' 'Jon Pertwee,' says Lambert.' Was a much more establishment figure than Hartnell. Patrick Troughton was more kindly, less dangerous, but Baker was less predictable and more dangerous again.' The real reason for his popularity lies in his character, not his powers: 'He was not part of the establishment, but a loner, an adult who behaves like a child, anti -authoritarian and eccentric.' But others cannot fathom the attraction at all. Gerry Anderson, creator of another science fiction cult, Thunderbirds, and more recently Space Precinct, says he has never seen why Who is so loved, and whenever it was on could not bear to watch it for long. But he admits that his 10-year-old son is an addict who delivers him a 'blitzkrieg of Doctor Who every day of the week.' 'Why was this low-budget show so successful? My only theory is that the BBC tends to stick with its shows week after week, making them habit-forming like a drug.' At least they did until the late Eighties, and now it seems they have seen the error of their ways.

The trick in the latest 'regeneration' of the Who series will be in avoiding parody on one hand and in not competing with the lavish Hollywood vision of science fiction on the other. Part of Doctor Who's attraction, like that of the BBC, is in the quality of the ideas, not the quantity of its budget. As Jon Pertwee once put it, 'I think it's more frightening to find a yeti in Tooting Bec or the daleks streaming over Westminster Bridge than it is to find them on an alien planet.' Naturally the Doctor's followers always knew him better than the corporation's daleks " they simply didn't listen carefully enough. It was the Doctor himself who observed of the Time Lords in 1967's The Tomb of the Cybermen, 'We can live for ever, barring accidents.' Perhaps the BBC has finally admitted that there is no point engineering accidents to exterminate the Doctor. Maybe it has admitted defeat against a being with two hearts and 13 lives. Not to mention a huge worldwide audience.

Born Possibly in 1075, on the planet Gallifrey.

Marital status None known, but more than 30 different 'personal assistants'.

Life expectancies At least 12, eight of which already used.