He's on to another time, space 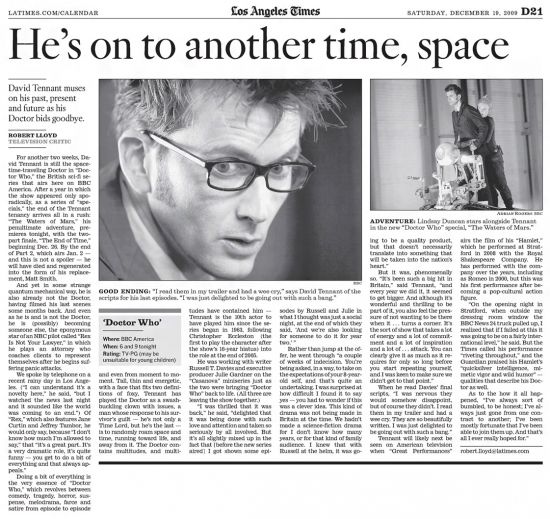 David Tennant muses on his past, present and future as his Doctor bids goodbye.

For another two weeks, David Tennant is still the space-time-traveling Doctor in "Doctor Who," the British sci-fi series that airs here on BBC America. After a year in which the show appeared only sporadically, as a series of "specials," the end of the Tennant tenancy arrives all in a rush: "The Waters of Mars," his penultimate adventure, premieres tonight, with the two-part finale, "The End of Time," beginning Dec. 26. By the end of Part 2, which airs Jan. 2 —and this is not a spoiler — he will have died and regenerated into the form of his replacement, Matt Smith.

And yet in some strange quantum mechanical way, he is also already not the Doctor, having filmed his last scenes some months back. And even as he is and is not the Doctor, he is (possibly) becoming someone else, the eponymous star of an NBC pilot called "Rex Is Not Your Lawyer," in which he plays an attorney who coaches clients to represent themselves after he begins suffering panic attacks.

We spoke by telephone on a recent rainy day in Los Angeles. ("I can understand it's a novelty here," he said, "but I watched the news last night and it sounded like the world was coming to an end.") Of "Rex," which also features Jane Curtin and Jeffrey Tambor, he would only say, because "I don't know how much I'm allowed to say," that "it's a great part. It's a very dramatic role, it's quite funny — you get to do a bit of everything and that always appeals."

Doing a bit of everything is the very essence of "Doctor Who," which revolves between comedy, tragedy, horror, suspense, melodrama, farce and satire from episode to episode and even from moment to moment. Tall, thin and energetic, with a face that fits two definitions of foxy, Tennant has played the Doctor as a swashbuckling clown with issues, a man whose response to his survivor's guilt — he's not only a Time Lord, but he's the last —is to randomly roam space and time, running toward life, and away from it. The Doctor contains multitudes, and multitudes have contained him —Tennant is the 10th actor to have played him since the series began in 1963, following Christopher Eccleston (the first to play the character after the show's 16-year hiatus) into the role at the end of 2005.

He was working with writer Russell T. Davies and executive producer Julie Gardner on the "Casanova" miniseries just as the two were bringing "Doctor Who" back to life. (All three are leaving the show together.)

"I was thrilled that it was back," he said, "delighted that it was being done with such love and attention and taken so seriously by all involved. But it's all slightly mixed up in the fact that [before the new series aired] I got shown some episodes by Russell and Julie in what I thought was just a social night, at the end of which they said, 'And we're also looking for someone to do it for year two.'"

Rather than jump at the offer, he went through "a couple of weeks of indecision. You're being asked, in a way, to take on the expectations of your 8-year-old self, and that's quite an undertaking. I was surprised at how difficult I found it to say yes — you had to wonder if this was a clever idea. This kind of drama was not being made in Britain at the time. We hadn't made a science-fiction drama for I don't know how many years, or for that kind of family audience. I knew that with Russell at the helm, it was going to be a quality product, but that doesn't necessarily translate into something that will be taken into the nation's heart."

But it was, phenomenally so, "It's been such a big hit in Britain," said Tennant, "and every year we did it, it seemed to get bigger. And although it's wonderful and thrilling to be part of it, you also feel the pressure of not wanting to be there when it ... turns a corner. It's the sort of show that takes a lot of energy and a lot of commitment and a lot of inspiration and a lot of ... attack. You can clearly give it as much as it requires for only so long before you start repeating yourself, and I was keen to make sure we didn't get to that point."

When he read Davies' final scripts, "I was nervous they would somehow disappoint, but of course they didn't. I read them in my trailer and had a wee cry. They are so beautifully written. I was just delighted to be going out with such a bang."

Tennant will likely next be seen on American television when "Great Performances" airs the film of his "Hamlet," which he performed at Stratford in 2008 with the Royal Shakespeare Company. He has performed with the company over the years, including as Romeo in 2000, but this was his first performance after becoming a pop-cultural action figure.

"On the opening night in Stratford, when outside my dressing room window the BBC News 24 truck pulled up, I realized that if I failed at this it was going to be on a fairly international level," he said. But the Times called his performance "riveting throughout," and the Guardian praised his Hamlet's "quicksilver intelligence, mimetic vigor and wild humor" —qualities that describe his Doctor as well.

As to the how it all happened, "I've always sort of bumbled, to be honest; I've always just gone from one contract to another; I've been mostly fortunate that I've been able to join them up. And that's all I ever really hoped for."

Rating: TV-PG (may be unsuitable for young children)

GOOD ENDING: "I read them in my trailer and had a wee cry," says David Tennant of the scripts for his last episodes. "I was just delighted to be going out with such a bang."

ADVENTURE: Lindsay Duncan stars alongside Tennant in the new "Doctor Who" special, "The Waters of Mars."