He dishes out fifteen million thrills a week 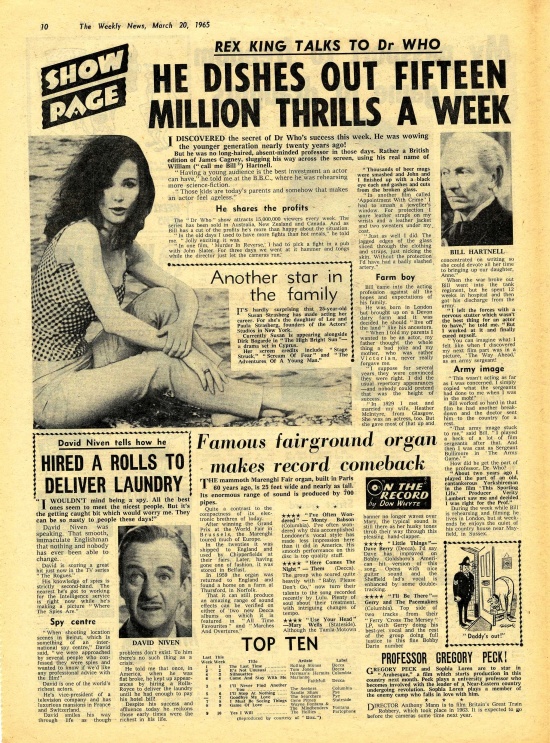 Rex King talks to Dr Who

He dishes out fifteen million thrills a week

I DISCOVERED the secret of Dr Who's success this week. He was wowing the younger generation nearly twenty years ago!

But he was no long-haired, absent-minded professor in those days. Rather edition of James Cagney, slugging his way across the screen, using his real William ("call me Bill") Hartnell.

"Having a young audience is the best investment an actor can have," he told me at the B.B.C., where he was rehearsing more science-fiction.

"Those kids are today's parents and somehow that makes an actor feel ageless."

He shares the profits

The "Dr Who" show attracts 15,000,000 viewers every week. The series has been sold in Australia, New Zealand and Canada. And as Bill has a cut of the profits he's more than happy about the situation.

"In the old days I used to have more fights than hot meals," he told me. "Jolly exciting it was.

"In one film, 'Murder In Reverse,' "I had to pick a fight in a pub with John Slater. For three days we went at it hammer and tongs while the director just let the cameras run.

In another film called 'Appointment With Crime' I had to smash a jeweller's window. For protection I wore leather straps on my wrists and a leather jacket and two sweaters under my coat.

"Just as well I did. The jagged edges of the glass sliced. through the clothing and straps, just nicking the skin. Without the protection I'd have had a badly slashed artery."

Bill camne into the acting profession against all the hopes and expectations of his family.

He was born in London but brought up on a Devon dairy farm and it was decided he should "live off the land" like his ancestors.

"When I told my parents I wanted to be an actor, my father thought the whole thing a bad joke and my mother, who was rather Victorian, never really forgave me.

"I suppose for several years they were convinced they were right. I did the usual repertory appearances—and nobody could pretend that was the height of success.

"In 1929 I met and married my wife, Heather McIntyre, from Glasgow. She was an actress, too. But she gave most of that up and concentrated on writing so she could devote all her time to bringing up our daughter, Anne."

When the war broke out Bill went into the tank regiment, but he spent 12 weeks in hospital and then got his discharge from the army.

"I left the forces with a nervous stutter which wasn't the best thing for an actor to have," he told me. "But I worked at it and finally cured myself.

"You can imagine what I felt like when I discovered my next film part was in a picture, 'The Way Ahead,' as an army sergeant!

"This wasn't acting as far as I was concerned. I simply copied what the sergeants had done to me when I was in the mob!"

Bill worked so hard in that film he had another breakdown and the doctor sent him to the country for a rest.

"That army image stuck to me," said Bill. "I played a heck of a lot of film sergeants after that. And then I was cast as Sergeant Bullimore in 'The Army Game.'"

How did he get the part of the professor, Dr Who?

"About two years ago I played the part of an old, cantankerous Yorkshireman in the film ' This Sporting Life.' Producer Verity Lambert saw me and decided I was right for the Prof."

During the week while Bill is rehearsing and filming he lives in London, but at weekends he enjoys the quiet of his country house near Mayfield, in Sussex.