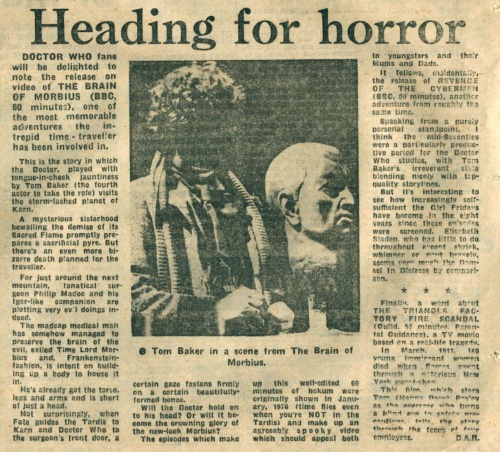 DOCTOR WHO fans will be delighted to note the release on video of THE BRAIN OF MORBIUS (BBC, 60 minutes), one of the most memorable adventures the intrepid time - traveller has been involved in.

This is the story in which the Doctor, played with tongue-in-cheek jauntiness by Tom Baker (the fourth actor to take the role) visits the storm-lashed planet of Karn.

A mysterious sisterhood bewailing the demise of its Sacred Flame promptly prepares a sacrificial pyre. But there's an even more bizarre death panned for the traveller.

For just around the next mountain, fanatical surgeon Philip Madoc and his Igor-like companion are plotting very evil doings indeed.

The madcap medical man has somehow managed to preserve the brain of the evil, exiled Time Lord Morbius and, Frankenstein-fashion, is intent on building up a body to house it in.

He's already got the torso, legs and arms and is short of just a head.

Not surprisingly, when Fate guides the Tardis to Karn and Doctor Who to the surgeon's front door, a certain gaze fastens firmly on a certain beautifully-termed bonce.

Will the Doctor hold on to his head? Or will it become the crowning glory of the new-look Morbius?

The episodes which make up this well-edited 60 minutes of hokum were originally shown in January, 1976 (time flies even when you're NOT in the Tardis) and make up an agreeably spooky video which should appeal both to youngsters and their Mums and Dads.

It follows, incidentally, the release of REVENGE OF THE CYBERMEN (BBC, 90 minutes), another adventure from roughly the same time.

Speaking from a purely personal standpoint, I think the mid-Seventies were a particularly productive period for the Doctor Who studios, with Tom Baker's irreverent style blending nicely with top-quality storylines.

But it's interesting to see how increasingly self-sufficient the Girl Fridays have become in the eight years since these episodes were screened. Elisabeth Sladen, who has little to do throughout except shriek, whimper or pout bravely, seems very much the Damsel in Distress by comparison.

Caption: Tom Baker in a scene from The Brain of Morbius.