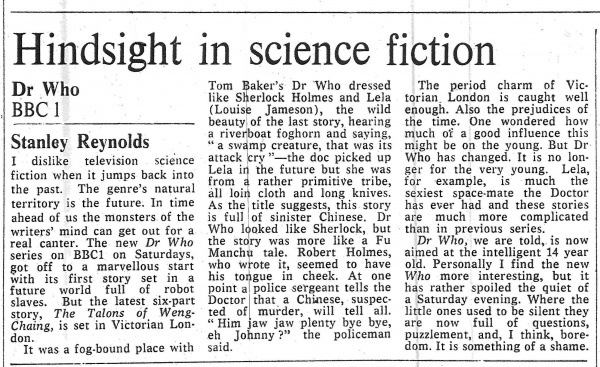 I dislike television science fiction when it jumps back into the past. The genre's natural territory is the future. In time ahead of us the monsters of the writers' mind can get out for a real canter. The new Dr Who series on BBC1 on Saturdays, got off to a marvellous start with its first story set in a future world full of robot slaves. But the latest six-part story, The Talons of Weng-Chaing, is set in Victorian London.

It was a fog-bound place with Tom Baker's Dr Who dressed like Sherlock Holmes and Lela (Louise Jameson), the wild beauty of the last story, hearing a riverboat foghorn and saying, "a swamp creature, that was its attack cry"—the doc picked up Lela in the future but she was from rather primitive tribe, all loin cloth and long knives. As the title suggests, this story is full of sinister Chinese. Dr Who looked like Sherlock, but the story was more like a Fu Manchu tale. Robert Holmes, who wrote it, seemed to have his tongue in cheek. At one point a police sergeant tells the Doctor that a Chinese, suspected of murder, will tell all. "Him aw jaw plenty bye bye, eh Jonny?" the policeman said.

The period charm of Victorian London is caught well enough. Also the prejudices of the time. One wondered how much of a good influence this might be on the young. But Dr Who has changed. It is no longer for the very young. Lela, for example, is much the sexiest space-mate the Doctor has ever had and these stories are much more complicated than in previous series.

Dr Who, we are told, is now aimed at the intelligent 14 year old. Personally I find the new Who more interesting, but it has rather spoiled the quiet of a Saturday evening. Where the little ones used to be silent they are now full of questions, puzzlement, and, I think, boredom. It is something of a shame.