How Doctor Who was rescued from oblivion 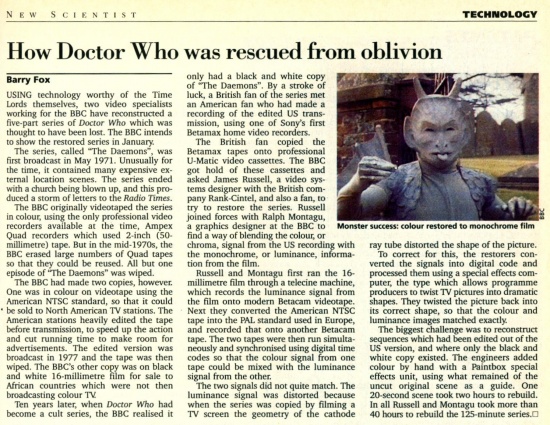 USING technology worthy of the Time Lords themselves, two video specialists working for the BBC have reconstructed a five-part series of Doctor Who which was thought to have been lost. The BBC intends to show the restored series in January.

The series, called "The Daemons", was first broadcast in May 1971. Unusually for the time, it contained many expensive external location scenes. The series ended with a church being blown up, and this produced a storm of letters to the Radio Times.

The BBC originally videotaped the series in colour, using the only professional video recorders available at the time, Ampex Quad recorders which used 2-inch (50-millimetre) tape. But in the mid-1970s, the BBC erased large numbers of Quad tapes so that they could be reused. All but one episode of "The Daemons" was wiped.

The BBC had made two copies, however. One was in colour on videotape using the American NTSC standard, so that it could be sold to North American TV stations. The American stations heavily edited the tape before transmission, to speed up the action and cut running time to make room for advertisements. The edited version was broadcast in 1977 and the tape was then wiped. The BBC's other copy was on black and white 16-millimetre film for sale to African countries which were not then broadcasting colour TV

Ten years later, when Doctor Who had become a cult series, the BBC realised it only had a black and white copy of "The Daemons". By a stroke of luck, a British fan of the series met an American fan who had made a recording of the edited US transmission, using one of Sony's first Betamax home video recorders.

The British fan copied the Betamax tapes onto professional U-Matic video cassettes. The BBC got hold of these cassettes and asked James Russell, a video systems designer with the British company Rank-Cintel, and also a fan, to try to restore the series. Russell joined forces with Ralph Montagu, a graphics designer at the BBC to find a way of blending the colour, or chroma, signal from the US recording with the monochrome, or luminance, information from the film.

Russell and Montagu first ran the 16-millimetre film through a telecine machine, which records the luminance signal from the film onto modern Betacam videotape. Next they converted the American NTSC tape into the PAL standard used in Europe, and recorded that onto another Betacam tape. The two tapes were then run simultaneously and synchronised using digital time codes so that the colour signal from one tape could be mixed with the luminance signal from the other.

The two signals did not quite match. The luminance signal was distorted because when the series was copied by filming a TV screen the geometry of the cathode ray tube distorted the shape of the picture.

To correct for this, the restorers converted the signals into digital code and processed them using a special effects computer, the type which allows programme producers to twist TV pictures into dramatic shapes. They twisted the picture back into its correct shape, so that the colour and luminance images matched exactly.

The biggest challenge was to reconstruct sequences which had been edited out of the US version, and where only the black and white copy existed. The engineers added colour by hand with a Paintbox special effects unit, using what remained of the uncut original scene as a guide. One 20-second scene took two hours to rebuild. In all Russell and Montagu took more than 40 hours to rebuild the 125-minute series.