How Dr Who beats time 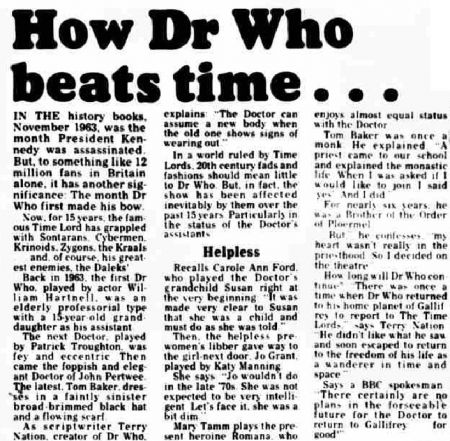 IN THE history books, November 1963, was the month President Kennedy was assassinated. But, to something like 12 million fans in Britain alone. it has another significance The month Dr Who first made his bow.

Now, for 15 years, the famous Time Lord has grappled with Sontarans, Cybermen, Krinoids, Zygons, the Kraals and of course, his greatest enemies, the Daleks.

Back in 1963, the first Dr Who, played he actor William Hartnell, was an elderly professorial type with a 15-year old granddaughter as his assistant.

The next Doctor, played by Patrick Troughton, was fey and eccentric. Then came the foppish and elegant Doctor of John Pertwee. The latest, Tom Baker, dresses in a faintly sinister broad-brimmed black hat and a flowing scarf. A

s scriptwriter Terry Nation. creator of Dr Who explains "The Doctor can assume a new body when the old one shows signs of wearing out."

In a world ruled by Time Lords, 20th century fads and fashions should mean little to Dr Who But, in fact, the show has been affected inevitably by them over the past 15 years. Particularly in the status of the Doctor's assistants

Recalls Carole Ann Ford who played the Doctor's grandchild Susan right at the very beginning "It was made very clear to Susan that she was a child and must do as she was told."

She says "Jo wouldn't I do in the late 70s. She was not expected to be very intelligent. Let's face it, she was a bit dim."

Tom Baker was once a monk. He explained "A priest came to our school and explained the monastic life. When I was asked if I would like to join I said yes. And I did.

For nearly six years, he was a Brother of the Order of Ploermel.

But, he confesses, "my heart wasn't really in the priesthood. So I decided on the theatre.

How long will Dr Who continue? "There was once a time when Dr Who returned to his home planet of Gallifrey to report to The Time Lords," says Terry Nation.

"He didn't like what he saw and soon escaped to return to the freedom of his life as a wanderer in time and spare."

Says a BBC spokesman "There certainly are no plans in the forseeable future for the Doctor to return to Gallifrey for good."