How I finally made mum proud ...when I qualified as a Doctor 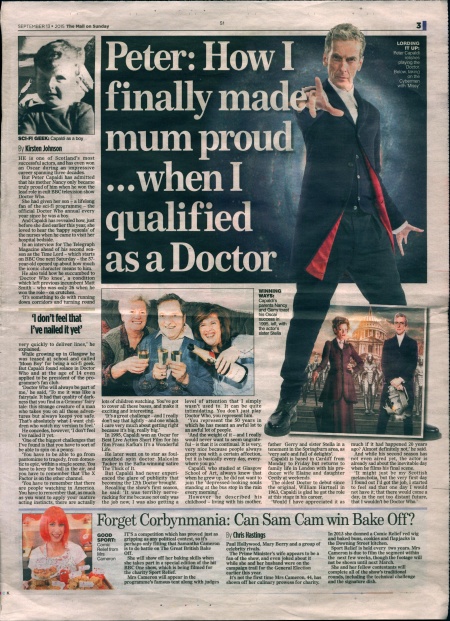 Peter: How I finally made mum proud ...when I qualified as a Doctor

HE is one of Scotland's most successful actors, and has even won an Oscar during an impressive career spanning three decades.

But Peter Capaldi has admitted that his mother Nancy only became truly proud of him when he won the lead role in cult BBC television show Doctor Who.

She had given her son - a lifelong fan of the sci-fi programme - the official Doctor Who annual every year since he was a boy.

And Capaldi has revealed how, just before she died earlier this year, she loved to hear the 'happy squeals' of the nurses when he came to visit her hospital bedside.

In an interview for The Telegraph Magazine ahead of his second season as the Time Lord - which starts on BBC One next Saturday - the 57-year-old opened up about how much the iconic character means to him.

He also told how he succumbed to 'Doctor Who knee', a condition which left previous incumbent Matt Smith - who was only 26 when he won the role - on crutches.

'It's something to do with running down corridors and turning round very quickly to deliver lines,' he explained.

While growing up in Glasgow he was teased at school and called 'Moon Boy' for being a sci-fi geek. But Capaldi found solace in Doctor Who and at the age of 14 even applied to be president of the programme's fan club.

'Doctor Who will always be part of me,' he said, 'To me it was like a fairytale. It had that quality of darkness that you find in a Grimms' fairy tale: this strange creature of a man who takes you on all these adventures but always keeps you safe. That's absolutely what I want children who watch my version to feel.' He concedes, however, 'I don't feel I've nailed it yet.

'One of the biggest challenges that I've found is that you have to sort of be able to spin on a penny.

'You have to be able to go from pantomime to tragedy, from domestic to epic, within a single scene. You have to keep the ball in the air, and you have to remember that The X Factor is on the other channel.

'It's a great challenge - and I really don't say that lightly - and one which I care very much about getting right because it's big, really big.'

In 1995, Capaldi won an Oscar for Best Live Action Short Film for his film Franz Kafka's It's a Wonderful Life.

He later went on to star as foulmouthed spin doctor Malcolm Ricker in the Bafta-winning satire The Thick of It.

But Capaldi had never experienced the glare of publicity that becoming the 12th Doctor brought. Recalling the show's first season, he said: 'It was terribly nerve-racking for me because not only was the job new, I was also getting a level of attention that I simply wasn't used to. It can be quite intimidating. You don't just play Doctor Who, you represent him. 'You represent the 50 years in which he has meant an awful lot to an awful lot of people.

'And the weight of it - and I really would never want to seem ungrateful - is that it is continual. It is very, very nice because people always greet you with a certain affection, but it is basically every day, everywhere you go.'

Capaldi, who studied at Glasgow School of Art, always knew that when he grew up, he did not want to join the 'depressed-looking souls standing at the bus stop in the rain every morning'.

However he described his childhood - living with his mother, father Gerry and sister Stella in a tenement in the Springburn area, as 'very safe and full of delights'. Capaldi is based in Cardiff from Monday to Friday but returns to family life in London with his producer wife Elaine and daughter Cecily at weekends.

The oldest Doctor to debut since the original, William Hartnell in 1963, Capaldi is glad he got the role at this stage in his career.

'Would I have appreciated it as much if it had happened 20 years ago? Almost definitely not,' he said. And while his second season has not even aired yet, the actor is already sad about the inevitable day when he films his final scene.

'It might just be my Scottish melancholia, but the very first day I found out I'd got the job, I started to feel sad that one day I would not have it; that there would come a day, in the not too distant future, that I wouldn't be Doctor Who.'

Caption: LORDING IT UP: Peter Capaldi relishes playing the Doctor. Below. taking on the Cybermen with 'Missy'