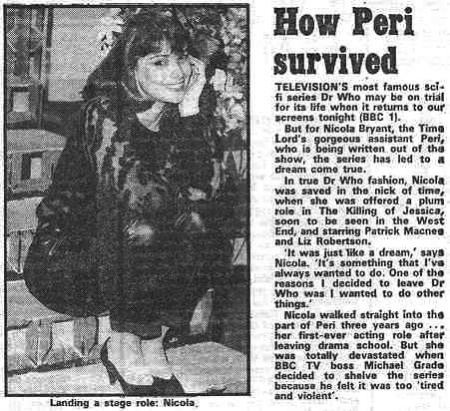 Television's most famous sci-fi series Dr Who may be on trial for its life when it returns to our screens tonight (BBC 1).

But for Nicola Bryant, the Time Lord's gorgeous assistant Peri, who is being written out of the show, the series has led to a dream come true.

In true Dr. Who fashion, Nicola was saved in the nick of time, when she was offered a plum role in The Killing of Jessica, soon to be seen in the West End, and starring Patrick Macnee and Liz Robertson.

'It was just like a dream,' says Nicola. 'It's something that I've always wanted to do. One of the reasons I decided to leave Dr. Who was I wanted to do other things.'

Nicola walked straight into the part of Peri three years ago her first ever acting role after leaving drama school. But she was totally devastated when BBC TV boss Michael grade decided to shelve the series because he felt it was too 'tired and violent'.