How time has travelled ... next Dr Who to be a woman 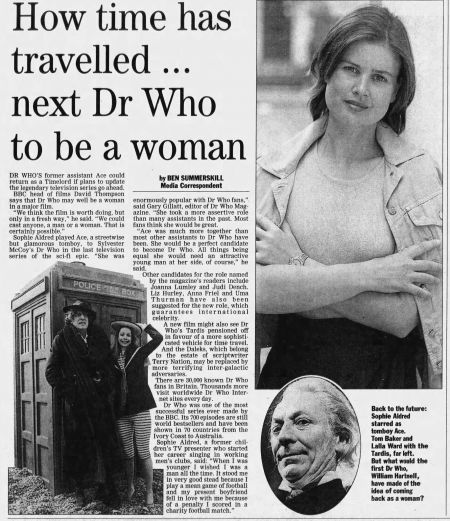 DR WHO'S former assistant Ace could return as a Timelord if plans to update the legendary television series go ahead.

BBC head of films David Thompson says that Dr Who may well be a woman in a major film.

"We think the film is worth doing, but only in a fresh way," he said. "We could cast anyone, a man or a woman. That is certainly possible."

Sophie Aldred played Ace, a streetwise but glamorous tomboy, to Sylvester McCoy's Dr Who in the last television series of the sci-fi epic. "She was enormously popular with Dr Who fans," said Gary Gillatt, editor of Dr Who Magazine. "She took a more assertive role than many assistants in the past. Most fans think she would be great.

"Ace was much more together than most other assistants to Dr Who have been. She would be a perfect candidate to become Dr Who. All things being equal she would need an attractive young man at her side, of course," he said.

Other candidates for the role named by the magazine's readers include Joanna Lumley and Judi Dench. Liz Hurley, Anna Friel and Uma Thurman have also been suggested for the new role, which guarantees international celebrity.

A new film might also see Dr Who's Tardis pensioned off in favour of a more sophisticated vehicle for time travel. And the Daleks, which belong

to the estate of scriptwriter Terry Nation, may be replaced by more terrifying inter-galactic adversaries.

There are 30,000 known Dr Who fans in Britain. Thousands more visit worldwide Dr Who Internet sites every day.

Dr Who was one of the most successful series ever made by the BBC. Its 700 episodes are still world bestsellers and have been shown in 70 countries from the Ivory Coast to Australia.

Sophie Aldred, a former children's TV presenter who started her career singing in working men's clubs, said: "When I was younger I wished I was a man all the time. It stood me in very good stead because I play a mean game of football and my present boyfriend fell in love with me because of a penalty I scored in a charity football match."

Caption: Back to the future: Sophie Aldred starred as tomboy Ace. Tom Baker and Lalla Ward with the Tardis, far left. But what would the first Dr Who, William Hartnell, have made of the idea of coming back as a woman?