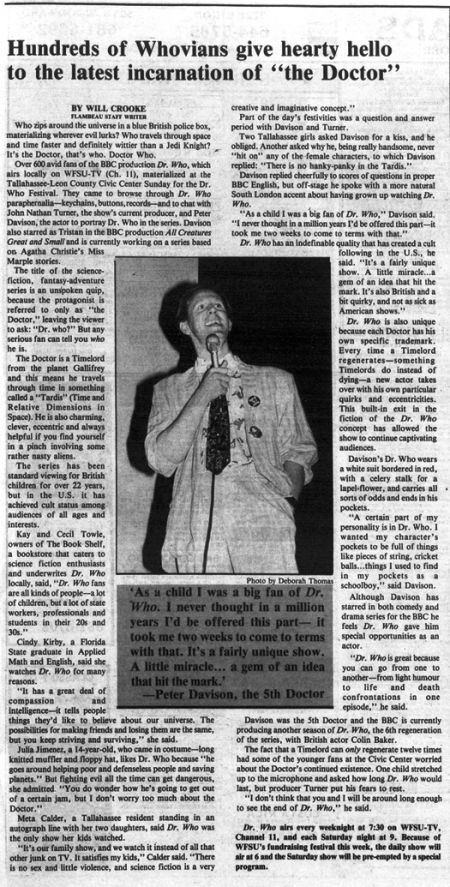 Who zips around the universe in a blue British police box, materializing wherever evil lurks? Who travels through space and time faster and definitely wittier than a Jedi Knight? It's the Doctor, that's who. Doctor Who.

Over 600 avid fans of the BBC production Dr. Who, which airs locally on WFSU-TV (Ch. 11), materialized at the Tallahassee-Leon County Civic Center Sunday for the Dr. Who Festival. They came to browse through Dr. Who paraphernalia—keychains, buttons, records—and to chat with John Nathan Turner, the show's current producer, and Peter Davison, the actor to portray Dr. Who in the series. Davison also starred as Tristan in the BBC production All Creatures Great and Small and is currently working on a series based on Agatha Christie's Miss Marple stories.

The title of the science-fiction, fantasy-adventure series is an unspoken quip, because the protagonist is referred to only as "the Doctor," leaving the viewer to ask: "Dr. who?" But any serious fan can tell you who he is.

The Doctor is a Timelord from the planet Gallifrey and this means he travels through time in something called a "Tardis" (Time and Relative Dimensions in Space). He is also charming, clever, eccentric and always helpful if you find yourself in a pinch involving some rather nasty aliens.

The series has been standard viewing for British children for over 22 years, but in the U.S. it has achieved cult status among audiences of all ages and interests.

Kay and Cecil Towle, owners of The Book Shelf, a bookstore that caters to science fiction enthusiasts and underwrites Dr. Who locally, said, "Dr. Who fans are all kinds of people—a lot of children, but a lot of state workers, professionals and students in their 20s and 30s."

Cindy Kirby, a Florida State graduate in Applied Math and English, said she watches Dr. Who for many reasons.

"It has a great deal of compassion and intelligence—it tells people things they'd like to believe about our universe. The possibilities for making friends and losing them are the same, but you keep striving and surviving," she said.

Julia Jimenez, a 14-year-old, who came in costume—long knitted muffler and floppy hat, likes Dr. Who because "he goes around helping poor and defenseless people and saving planets." But fighting evil all the time can get dangerous, she admitted "You do wonder how he's going to get out of a certain jam, but I don't worry too much about the Doctor."

Meta Calder, a Tallahassee resident standing in an autograph line with her two daughters, said Dr. Who was the only show her kids watched.

"It's our family show, and we watch it instead of all that other junk on TV. It satisfies my kids," Calder said. "There is no sex and little violence, and science fiction is a very creative and imaginative concept."

Part of the day's festivities was a question and answer period with Davison and Turner.

Two Tallahassee girls asked Davison for a kiss, and he obliged. Another asked why he, being really handsome, never "hit on" any of the female characters, to which Davison replied: "There is no hanky-panky in the Tardis."

Davison replied cheerfully to scores of questions in proper BBC English, but off-stage he spoke with a more natural South London accent about having grown up watching Dr. Who.

"As a child I was a big fan of Dr. Who," Davison said. "I never thought in a million years I'd be offered this part—it took me two weeks to come to terms with that."

Dr. Who has an indefinable quality that has created a cult following in the U.S., he said. "It's a fairly unique show. A little miracle...a gem of an idea that hit the mark. It's also British and a bit quirky, and not as sick as American shows."

Dr. Who is also unique because each Doctor has his own specific trademark. Every time a Timelord regenerates—something Timelords do instead of dying—a new actor takes over with his own particular quirks and eccentricities. This built-in exit in the fiction of the Dr. Who concept has allowed the show to continue captivating audiences.

Davison's Dr. Who wears a white suit bordered in red, with a celery stalk for a lapel-flower, and carries all sorts of odds and ends in his pockets.

"A certain part of my personality is in Dr. Who. I wanted my character's pockets to be full of things like pieces of string, cricket balls...things I used to find in my pockets as a schoolboy," said Davison.

Although Davison has starred in both comedy and drama series for the BBC he feels Dr. Who gave him

special opportunities as an actor.

"Dr. Who is great because you can go from one to another—from light humour to life and death confrontations in one episode," he said.

Davison was the 5th Doctor and the BBC is currently producing another season of Dr. Who, the 6th regeneration of the series, with British actor Colin Baker.

The fact that a Timelord can only regenerate twelve times had some of the younger fans at the Civic Center worried about the Doctor's continued existence. One child stretched up to the microphone and asked how long Dr. Who would last, but producer Turner put his fears to rest.

"I don't think that you and I will be around long enough to see the end of Dr. Who," he said.

Dr. Who airs every weeknight at 7:30 on WFSU-TV, Channel 11, and each Saturday night at 9. Because of WFSU's fundraising festival this week, the daily show will air at 6 and the Saturday show will be pre-empted by a special program.