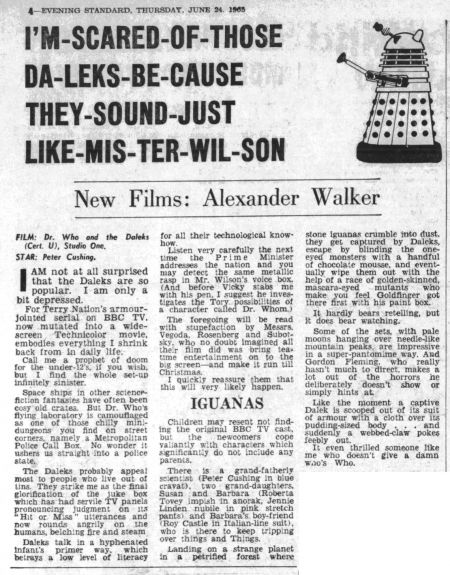 I AM not at all surprised that the Daleks are so popular. I am only a bit depressed.

For Terry Nation's armour-jointed serial on BBC TV. now mutated into a wide-screen Technicolor movie. embodies everything I shrink back from in daily life.

Call me a prophet of doom for the under-12's. it you wish. but I find the whole set-up infinitely sinister.

Space ships in other science-fiction fantasies have often been cosy old crates. But Dr. Who's flying laboratory is camouflaged as one of those chilly mini-dungeons you find on street corners, namely a Metropolitan Police Call Box. No wonder it ushers us straight into a police state.

The Daleks probably appeal most to people who live out of tins. They strike me as the final glorification of the juke box which has had servile TV panels pronouncing judgment on its "Hit or Miss" utterances and now rounds angrily on the humans, belching fire and steam.

Daleks talk in a hyphenated Infant's primer way, which betrays a low level of literacy for all their technological know-how.

Listen very carefully the next time the Prime Minister addresses the nation and you may detect the same metallic rasp in Mr. Wilson's voice box. (And before Vicky stabs me with his pen. I suggest he investigates the Tory possibilities of a character called Dr. Whom.)

The foregoing will be read with stupefaction by Messrs. Vegoda, Rosenberg and Subotsky, who no doubt imagined all their film did was bring teatime entertainment on to the big screen—and make it run till Christmas.

I quickly reassure them that this will very likely happen.

Children may resent not finding the original BBC TV cast, but the newcomers cope valiantly with characters which significantly do no: include any parents.

There is a grand-fatherly scientist (Peter Cushing in blue cravat), two grand-daughters. Susan and Barbara (Roberta Tovey impish in anorak, Jennie Linden nubile in pink stretch pants) and Barbara's boy-friend (Roy Castle in Italian-line suit). who is there to keep tripping over things and Things.

Landing on a strange planet in a petrified forest where stone iguanas crumble into dust. they get captured by Daleks, escape by blinding the one-eyed monsters with a handful of chocolate mousse, and eventually wipe them out with the help of a race of golden-skinned, mascara-eyed mutants who make you feel Goldfinger got there first with his paint box.

It hardly bears retelling, Put it does bear watching.

Some of the sets, with pale moons hanging over needle-like mountain peaks, are impressive in a super-pantomime way. And Gordon Fleming. who really hasn't much to direct, makes a lot out of the horrors he deliberately doesn't show or simply hints at.

Like the moment a captive Dalek is scooped out of its suit of armour with a cloth over its pudding-sized body ... and suddenly a webbed-claw pokes feebly out.

It even thrilled someone like me who doesn't give a damn who's Who.