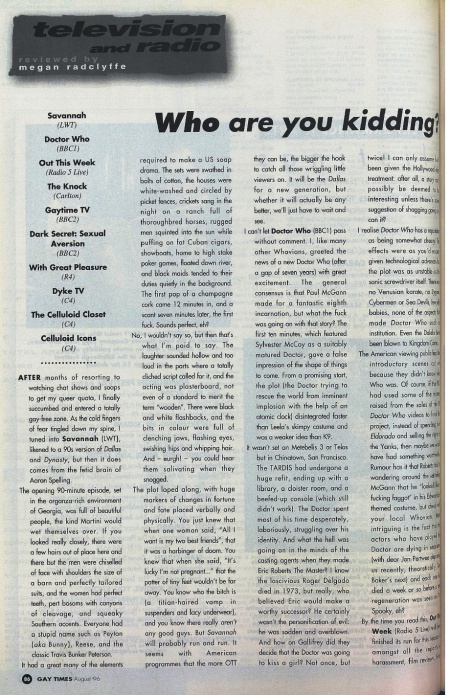 I can't let Doctor Who (BBC1) pass without comment. I, like many other Whovians, greeted the news of a new Doctor Who (after a gap of seven years) with great excitement. The general consensus is that Paul McGann made for a fantastic eighth incarnation, but what the fuck was going on with that story? The first ten minutes, which featured Sylvester McCoy as a suitably matured Doctor, gave a false impression of the shape of things to come. From a promising start, the plot (the Doctor trying to rescue the world from imminent implosion with the help of an atomic clock) disintegrated faster than Leela's skimpy costume and was a weaker idea than K9.

It wasn't set on Metebelis 3 or Telos but in Chinatown, San Francisco. The TARDIS had undergone a huge refit, ending up with a library, a cloister room, and a beefed-up console (which still didn't work). The Doctor spent most of his time desperately, laboriously, struggling over his identity. And what the hell was going on in the minds of the casting agents when they made Eric Roberts The Master? I know the lascivious Roger Delgado died in 1973, but really, who believed Eric would make a worthy successor? He certainly wasn't the personification of evil: he was sodden and overblown. And how on Gallifrey did they decide that the Doctor was going to kiss a girl? Not once, but twice! I can only assume he'd been given the Hollywood-style treatment: after all, a story couldn't possibly be deemed to be interesting unless there's a suggestion of shagging or, can it?

I realise Doctor Who has a reputation as being somewhat cheesy. The effects were as you'd expect, given technological advances but6 the plot was as unstable as the sonic screwdriver itself. There was no Venusian karate, no Zygons, Cybermen or Sea Devils, few jelly babies, none of the aspects that made Doctor Who such an institution. Even the Daleks have been blown to Kingdom Come.

The American viewing public had the introductory scenes cut because they didn't know who Who was. Of course, if the BBC had used some of the money raised from the sales of the 98 Doctor Who videos to fund the project, instead of spending it on Eldorado and selling the rights to the Yanks, then maybe we would have had something worthwhile. Rumour has it that Roberts took a wandering around the set telling McGann that he "looked like a fucking faggot" in his Edwardian themed costume, but check your local Whovian. More intriguing is the fact that actors who have played the Doctor are dying in sequence (with dear Jon Pertwee departing us recently, theoretically, Tom Baker's next) and each one has died a week or so before a new regeneration was seen on TV? Spooky, eh?