I don't think we can save this one, Doctor 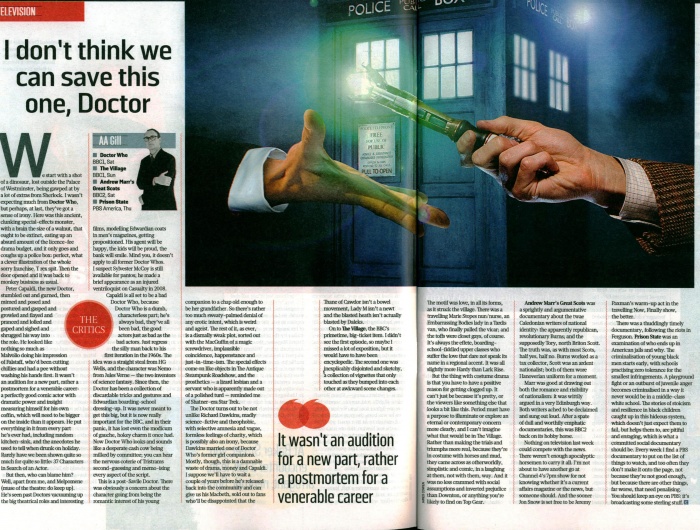 We start with a shot of a dinosaur, lost outside the Palace of Westminster, being gawped at by a lot of extras from Sherlock. I wasn't expecting much from Doctor Who, but perhaps, at last, they've got a sense of irony. Here was this ancient, clunking special-effects monster, with a brain the size of a walnut, that ought to be extinct, eating up an absurd amount of the licence-fee drama budget, and it only goes and coughs up a police box: perfect, what a clever illustration of the whole sorry franchise. T rex spit. Then the door opened and it was back to monkey business as usual.

Peter Capaldi, the new Doctor, stumbled out and gurned, then mimed and posed and postured and gasped and growled and flayed and pranced and lolled and gaped and sighed and shrugged his way into the role. He looked like nothing so much as Malvolio doing his impression of Falstaff, who'd been cutting chillies and had a pee without washing his hands first. It wasn't an audition for a new part, rather a postmortem for a venerable career: a perfectly good comic actor with dramatic power and insight measuring himself for his own coffin, which will need to be bigger on the inside than it appears. He put everything in it from every part he's ever had, including random kitchen--sink, and the anecdotes he used to tell when drunk on holiday. Rarely have we been shown quite so much for quite so little: 37 Characters in Search of an Actor.

But then, who can blame him? Well, apart from me, and Melpomene (muse of the theatre: do keep up).

He's seen past Doctors vacuuming up the big theatrical roles and interesting films, modelling Edwardian coats in men's magazines, getting propositioned. His agent will be happy, the kids will be proud, the bank will smile. Mind you, it doesn't apply to all former Doctor Whos. I suspect Sylvester McCoy is still available for pantos; he made a brief appearance as an injured ventriloquist on Casualty in 2008.

Capaldi is all set to be a bad Doctor Who, because Doctor Who is a dumb, characterless part; he's always bad, they've all been bad, the good actors just as bad as the bad actors. Just regress the silly man back to his first iteration in the 1960s. The idea was a straight steal from HG Wells, and the character was Nemo from Jules Verne — the two inventors of science fantasy. Since then, the Doctor has been a collection of discardable tricks and gestures and Edwardian boarding-school dressing-up. It was never meant to get this big, but it is now really important for the BBC, and in their panic, it has lost even the modicum of gauche, hokey charm it once had. Now Doctor Who looks and sounds like a desperate cash cow being milked by committee; you can hear the nervous coterie of Tristrarns second-guessing and memo-ising every aspect of the script.

This is a post-Savile Doctor. There was obviously a concern about the character going from being the romantic interest of his young companion to a chap old enough to be her grandfather. So there's rather too much sweaty-palmed denial of any erotic intent, which is weird and ageist. The rest of it, as ever, is a dismally weak plot, sorted out with the MacGuffin of a magic screwdriver, implausible coincidence, happenstance and just-in-time-ism. The special effects come on like objects in The Antique Steampunk Roadshow, and the prosthetics — a lizard lesbian and a servant who is apparently made out of a polished turd — reminded me of Shatner-era Star Trek.

The Doctor turns out to be not unlike Richard Dawkins, madly science-fictive and theophobic, with selective amnesia and vague, formless feelings of charity, which is possibly also an irony, because Dawkins married one of Doctor Who's former girl companions. Mostly, though, this is a damnable waste of drama, money and Capaldi. I suppose we'll have to wait a couple of years before he's released back into the community and can give us his Macbeth, sold out to fans who'll be disappointed that the lot. Thane of Cawdor isn't a bowel movement, Lady M isn't a newt and the blasted heath isn't actually blasted by Daleks.