I miss Doctor Who 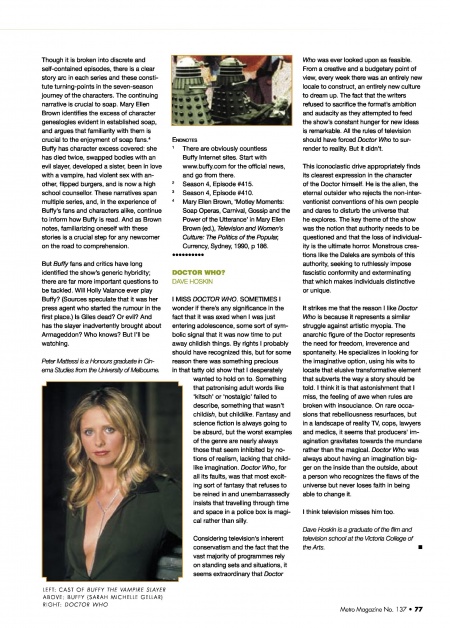 I MISS DOCTOR WHO. SOMETIMES I wonder if there's any significance in the fact that it was axed when I was just entering adolescence, some sort of symbolic signal that it was now time to put away childish things. By rights I probably should have recognized this, but for some reason there was something precious in that tatty old show that I desperately wanted to hold on to. Something that patronising adult words like 'kitsch' or 'nostalgic' failed to describe, something that wasn't childish, but childlike. Fantasy and science fiction is always going to be absurd, but the worst examples of the genre are nearly always those that seem inhibited by notions of realism, lacking that childlike imagination. Doctor Who, for all its faults, was that most exciting sort of fantasy that refuses to be reined in and unembarrassedly insists that travelling through time and space in a police box is magical rather than silly.

Considering television's inherent conservatism and the fact that the vast majority of programmes rely on standing sets and situations, it seems extraordinary that Doctor

Who was ever looked upon as feasible. From a creative and a budgetary point of view, every week there was an entirely new locale to construct, an entirely new culture to dream up. The fact that the writers refused to sacrifice the format's ambition and audacity as they attempted to feed the show's constant hunger for new ideas is remarkable. All the rules of television should have forced Doctor Who to surrender to reality. But it didn't.

This iconoclastic drive appropriately finds its clearest expression in the character of the Doctor himself. He is the alien, the eternal outsider who rejects the non-interventionist conventions of his own people and dares to disturb the universe that he explores. The key theme of the show was the notion that authority needs to be questioned and that the loss of individuality is the ultimate horror. Monstrous creations like the Daleks are symbols of this authority, seeking to ruthlessly impose fascistic conformity and exterminating that which makes individuals distinctive or unique.

It strikes me that the reason I like Doctor Who is because it represents a similar struggle against artistic myopia. The anarchic figure of the Doctor represents the need for freedom, irreverence and spontaneity. He specializes in looking for the imaginative option, using his wits to locate that elusive transformative element that subverts the way a story should be told. I think it is that astonishment that miss, the feeling of awe when rules are broken with insouciance. On rare occasions that rebelliousness resurfaces, but in a landscape of reality TV, cops, lawyers and medics, it seems that producers' imagination gravitates towards the mundane rather than the magical. Doctor Who was always about having an imagination bigger on the inside than the outside, about a person who recognizes the flaws of the universe but never loses faith in being able to change it.

I think television misses him too.

Dave Hoskin is a graduate of the film and television school at the Victoria College of the Arts.