I needed that Tardis at the theater 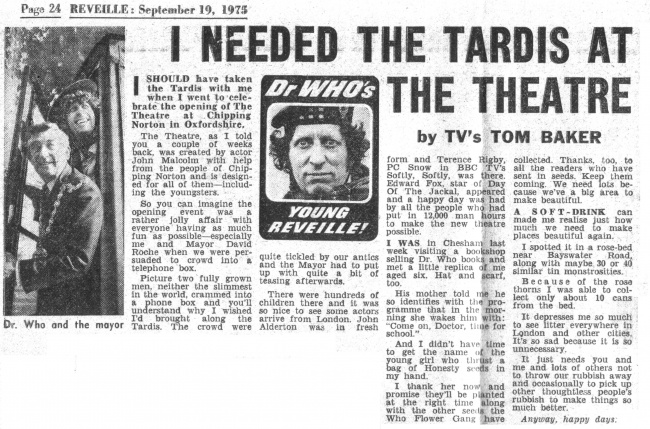 I needed that artists at the bitter and should have taken that either swiftly when I went to celebrate the opening of the theater at Chipping Norton in Oxfordshire.

The other as I told you a couple of weeks back, was created by actor John Malcom with the help from the people of Chipping Norton and is designed for all of them including the youngsters.

So you can imagine the opening event was a rather jolly affair with everyone having as much fun as possible--especially me and Mayor David Roche when we were persuaded to crowd into a telephone box.

Picture two fully grown man neither the slimmest in the world are crammed into a own box and you'll understand why I wished I brought along with Tardis the crowd were quite tickled by or antics and the mayor had to put up with quite a bit of teasing afterward.

There were hundreds of children there and it was so nice to see some actors arrive from London. John Alderton was in fresh form and Terrence Rigby, PC Snow in BBC TV's Softly Softly, was there. Edward Fox, star a Day of the Jackal, appeared and a happy day was had by all the people who have put in 12,000 man hours to make the new theater possible.

I was in Chesham a last week visiting a book shop selling Dr. Books and met a little replica of the aged six. Hat and scarf, too.

His mother told me he so identifies with a program that in the morning she wakes him with: "Come on, Doctor, time for school.

And I didn't have time to get the name of a young girl across the bag of Honesty seeds in my hand.

I think are now in promise they'll be planted at the right time along with the other seeds the Who Flower Gang have collected. Thanks too, to all the readers who have sent in seeds. Keep them coming. We need lots because we've a bigger area to be beautiful.

A soft-drink and that made me realise just how much we need to make place is beautiful again.

I spotted in a rose-bed near Bayswater Road, along with maybe 30 or 40 similar to an monstrosities.

Because of the rose thorns I was able to collect only about 10 cans from the bed.

It depresses me so much to see you litter everywhere in London and other cities it's so sad because it is so unnecessary.

It just means you and me and lots of others not to throw all rubbish away and occasionally to pick up other thoughtless people's rubbish to make things up so much better.

Caption Dr. Who and the mayor